Update Required To play the media you will need to either update your browser to a recent version or update your Flash plugin.
By Jonathan Evans
19 December 2020


COVID-19 is changing the way Americans plan to celebrate the winter holidays this year. But, in Alaska, the National Guard found a way to carry out a beloved Christmas tradition for several distant Native American communities.

An Alaska National Guard helicopter recently landed on a frozen field in Stevens Village, home to about 30 people. Townspeople hurried to the landing field after seeing the helicopter land. They watched as the soldiers unloaded boxes containing gifts for almost everyone in the community.

Then the helicopter flew away.

"For 65 years we have not missed a beat," said Chief Winfield Hinkley, Jr., the Command Senior Enlisted Leader of the Alaska National Guard. He admitted that COVID-19 presented difficulty for Operation Santa Claus. But, he added, "it will not stop us from carrying out this tradition. It is an honor to do it."

In 1956, the remote Alaskan village of St. Mary's suffered periods of severe flooding and severe dryness. The townspeople faced a hard choice in the Christmas season: whether to provide food for St. Mary's or gifts for its children.

Then, the Alaska Air National Guard stepped in. The service brought donated gifts and supplies to the community.

Since then, the program has grown. In 1969, The Salvation Army became a partner in providing playthings and more to children across rural Alaska.

Each year, Operation Santa Claus attempts to get gifts to two or three villages that are chosen for different reasons. One village might have had a special hardship during the year. Another might have high poverty levels. 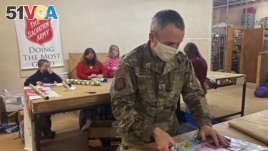 Chief Master Sgt. Winfield Hinkley Jr., Command Senior Enlisted Leader of the Alaska National Guard, wraps a gift in Anchorage, Alaska, that will be sent to a child in one of three rural Alaska villages, on Nov. 17, 2020.

Operation Santa Claus has provided for more than 90 villages since its beginning in St. Mary's. Stevens Village and two others, Birch Creek and Nanwalek, were chosen this year for the first time.

In a normal year, the arrival of Operation Santa Claus is a community event. People dress as the holiday characters Santa and Mrs. Claus, and their helpers. They celebrate with a party held at the local school building. All the townspeople are invited to have their photos taken with Santa and eat sweet treats. Gifts are handed out to children.

But this year, COVID-19 safety rules required that the gifts be left at the landing field.

"It was great because just being so locked down and with travel, you know, so out of touch with the outside world."

However, Kriska wishes it could have been the full experience, including having his own children enjoy a visit with Santa.

He said, "It would have been great for my kids to interact with them because they're needing that social interaction. I would have loved to have that picture with my daughters."

backpacks – n. bags for carrying things that has two shoulder straps and is carried on the back

character – n. the personality or part which an actor recreates; a person in a story or play