Update Required To play the media you will need to either update your browser to a recent version or update your Flash plugin.
By Gregory Stachel
22 May 2021


The World Health Organization, or WHO, says the COVID-19 pandemic has set back years of efforts to end neglected tropical diseases.

Neglected tropical diseases are a group of 20 diseases that affect 1.7 billion people, mainly from poor communities in tropical areas. Forty percent of the people affected are in Africa.

These diseases are both life-threatening and physically damaging. The WHO reports great progress has been made in the treatment of these diseases over the past 10 years. It says 42 countries around the world no longer have cases of at least one disease. 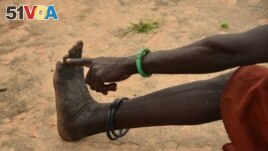 FILE - A woman points to her toe from where, she said, three worms emerged in 2009 when she was infected with Guinea worm in her town of Terekeka, South Sudan, Oct. 4, 2017.

Mwelecele Malecela is director of the WHO's neglected tropical diseases department. She says she fears a lot of this good work could be undone because of the harmful effects of COVID-19.

She says the pandemic has led to disruptions and delays in services for neglected tropical diseases. She says mass treatment campaigns, observations of affected areas, and the transport and giving out of medicines have been stopped.

Malecela said, "All the efforts that have been done to control neglected tropical diseases, to bring about elimination in most of the affected countries, will be reversed if the focus is not kept." She added that observation and continued efforts in countries that are nearing zero cases are needed.

The WHO says that Guinea Worm disease, one of the neglected tropical diseases, is about to be eliminated. The organization says there were only 27 human cases reported in six African countries last year. In 1986, there were as many as 3.5 million human cases of the disease in 21 African and Asian countries.

Yaws is a long-term skin infection that can be eliminated in South Asia.

And Malecela says there are other success stories. They include possible elimination of Trachoma, a bacterial infection in the eye, in Morocco, Ghana and The Gambia. And the WHO has eliminated Lymphatic filariasis in seventeen countries, including Togo, Malawi and Yemen.

At the end of January, the WHO announced a plan to eliminate these neglected tropical diseases by 2030. Health officials consider the plan an important part of making sure countries strengthen their health systems after COVID-19.

Lisa Schlein reported this story for Voice of America. Gregory Stachel adapted it for VOA Learning English. Hai Do was the editor.

neglected – adj. not given enough attention or care

tropical – adj. of, relating to, occurring in, or used in the part of the world that is near the equator where the weather is very warm

disruption – n. the act or process of something being unable to continue in the normal way: an interruption of the normal progress or activity of (something)

elimination – n. the act or process of removing something or someone