Update Required To play the media you will need to either update your browser to a recent version or update your Flash plugin.
By Susan Shand
14 December 2020


The largest and fastest vaccination effort in United States history started Monday as the nation has more than 300,000 deaths from COVID-19.

The first of many COVID-19 doses were sent to vaccination centers throughout the country. They are to be given to health care workers and people most at risk.

"I feel hopeful today," Sandra Lindsay, a health worker, said after getting a shot in the arm at Long Island Jewish Medical Center in New York. 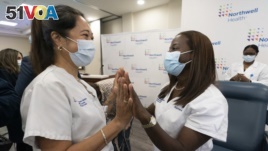 With a countdown of "3-2-1," workers at Ohio State University's Wexner Medical Center gave the first injections to applause.

And in New Orleans, Steven Lee, a pharmacist in an emergency care group at Ochsner Medical Center, said "We can finally prevent the disease as opposed to treating it."

The first doses are going to those who live in care homes and health care workers, who are exhausted. The virus, however, is still spreading around the U.S. and the world. The U.S. alone has had more than 16 million cases of infection by the new coronavirus, which causes the disease COVID-19.

The doses given today are the first of nearly three million that are being sent. More of the Pfizer-BioNTech vaccine will arrive each week. In addition, the U.S. Food and Drug Administration will decide whether to approve another heavily tested COVID-19 vaccine, made by Moderna later this week.

U.S. government officials say the goal is to give the first dose of the vaccine to 20 million people by the end of the month. They will get the required second dose by January. However, there will not be enough for most people to get a shot until spring.

"This is the light at the end of the tunnel. But it's a long tunnel," New York Governor Andrew Cuomo said.

The plan now is to quickly vaccinate millions of people. That includes not just doctors and nurses and other health workers, but other at-risk health workers such as cleaning workers and those who touch food.

The first shipments today contained about three million doses, with many more to come. U.S. government officials say the first shipments of Pfizer's vaccine will arrive at 145 vaccination centers throughout the day. Another 425 centers will get shipments Tuesday, and the remaining 66 on Wednesday. Doses of the vaccine are given out based on each state's adult population. The states decide where they go first.

A few other countries have cleared the Pfizer vaccine, including Britain, which started vaccinating people last week, and Canada, which began doing so on Monday.

The Pfizer vaccine was the first to be approved for emergency use by the Food and Drug Administration. The FDA is the government agency responsible for approving medicines in the United States. Health officials hope the American public will accept the vaccine. Some Americans have expressed a lack of belief in the vaccination process.

Earlier this month, research from The Associated Press-NORC Center for Public Affairs Research found that about half of Americans want to get the vaccine as soon as possible. Another one fourth are not sure. The remaining 25 percent said they will not be vaccinated. Most gave one of two reasons: they are against all vaccines or they think the coronavirus vaccine was approved too quickly.

Dr. Stephen Hahn is commissioner of the FDA, which approved the Pfizer vaccine Friday. He has said repeatedly that the decision to approve the drug was based on science, not politics.

Dr. Moncef Slaoui is the chief science adviser to the U.S. government's effort to get vaccines developed quickly. That effort is known as Operation Warp Speed. Slaoui said he was "very concerned" about a possible lack of trust in the vaccine.

"People are dying right now. How could you possibly say, ‘Let's wait and see'?" asked Dr. Francis Collins on Sunday on NBC's Meet the Press. He is the director of the National Institutes of Health.

The Associates Press reported on this story. Susan Shand adapted it for Learning English. Mario Ritter, Jr. was the editor.

dose –n. the amount of something, such as a medicine, needed to be effective

applause – n. the show of approval when people strike their hands together