COVID-19 Vaccine May Be Required for International Travelers

Update Required To play the media you will need to either update your browser to a recent version or update your Flash plugin.
By Bryan Lynn
27 November 2020

Promising news about vaccine development has given airlines and nations hope that they may soon be able to restart suspended flights. But some countries, especially in Asia and the Pacific, do not want their hard-fought gains against the virus to disappear. 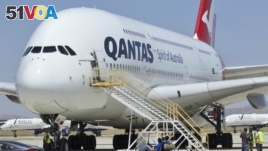 In this July 6, 2020, file photo, a Qantas Airbus A380 arrives in Victorville, Calif. Qantas said that once a virus vaccine becomes widely available, the carrier will likely require it before passengers can travel abroad or land in Australia. (AP Photo/Matt Hartman, File)

Alan Joyce is head of Australia's largest airline, Qantas. He said that once a COVID-19 vaccine is widely available, his carrier will likely require passengers to use it before they leave or land in Australia.

Joyce said he has been talking to officials at other airlines around the world about the possibility of creating a "vaccination passport" for international travelers.

"We are looking at changing our terms and conditions to say for international travelers, that we will ask people to have the vaccination before they get on the aircraft," Joyce told Australia's Network Nine television.

He said they were looking at ways to electronically confirm that people have the necessary vaccine for their planned destination.

Korean Air spokeswoman Jill Chung says there is a real possibility that airlines will require that passengers be vaccinated. She said that is because governments are likely to require vaccinations as a condition for lifting quarantine rules for new arrivals.

While Korean Air is reviewing several possibilities, Chung said any change by the company or other airlines should be a cooperative effort with governments. "This is not something for airlines to independently decide," she said.

A statement from Air New Zealand agreed it is up to governments to decide "when and how it is safe to reopen borders." The airline said it was continuing to work closely with government officials on the issue.

Australia, South Korea and New Zealand have all been able to successfully limit the spread of the virus. A big part of their containment efforts have centered on keeping infected people out.

Australia has enforced some of the most severe border restrictions in the world since the pandemic began. It has closed its borders to most international visitors and permitted its own citizens to travel internationally only in special cases. New Zealand has also closed its borders, while South Korea has required a two-week quarantine on all arriving passengers.

The Associated Press reported on this story. Bryan Lynn adapted the report for Learning English. Ashley Thompson was the editor.

destination – n. a place where someone plans to go