COVID Arrives in One of the Last Places Without It

Update Required To play the media you will need to either update your browser to a recent version or update your Flash plugin.
By Jill Robbins
31 January 2022


When the coronavirus began spreading around the world, the island nation of Kiribati closed its borders. That meant the disease did not reach the remote country in the Pacific for nearly two years.

Kiribati finally began reopening this month, letting a plane carrying 54 of its citizens to return. Many of those on the plane were religious workers from the Mormon Church. They had left Kiribati before the border closure to spread the church's teachings in other countries.

Officials tested each returning passenger three times in nearby Fiji. They were required to be vaccinated and stay in quarantine with additional testing when they arrived home. 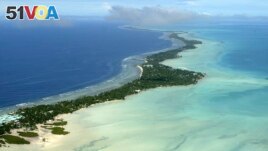 The measures were not enough.

More than half the passengers tested positive for the virus, which has now spread into the community. The government has declared a state of disaster. And what began as 36 positive cases from the flight increased to 181 cases by Friday.

Kiribati and several other small Pacific nations were among the last places on the planet to have avoided any virus outbreaks. They have little contact because of their remote locations and strict border controls. But their defenses appear to be ineffective against the highly contagious Omicron variant.

Before this month's outbreak, Kiribati had reported just two virus cases. They were crew members on a ship that officials did not permit to dock.

Helen Petousis-Harris is a vaccine expert at the University of Auckland in New Zealand. She said the spread of the virus could not be avoided. "It's a matter of buying enough time to prepare and getting as many people vaccinated as possible," she added.

Only 33 percent of Kiribati's 113,000 people are fully vaccinated. A scientific publication, Our World in Data, reports that 59 percent have had at least one shot of the vaccine. And like many other Pacific nations, Kiribati offers only basic health services.

Dr. Api Talemaitoga leads a network of Indigenous Pacific Island doctors in New Zealand. He said Kiribati had only two intensive care beds in the entire nation. In the past, the nation would send its sickest patients to Fiji or New Zealand for treatment. He said he is concerned about how Kiribati's health system will handle the outbreak.

Kiribati has now opened several quarantine areas, declared a curfew, and restricted movement. President Taneti Maamau said on social media that the government is using all its resources to deal with the situation and urged people to get vaccinated.

In October, another religious worker also brought the first and only case, so far, of COVID-19 to Tonga, an island nation over 2,000 kilometers southwest of Kiribati. He was vaccinated and quarantined following his return from Africa and New Zealand.

As Tonga is trying to prevent an outbreak, a strong volcanic explosion and tsunami destroyed the country earlier this month.

The nation of 105,000 people has since received aid from around the world. Crews from incoming military ships and planes must drop their supplies and leave without having any contact with those on the ground.

Petousis-Harris, the vaccine expert, said, "Anything they can do to keep it out is going to be important." COVID would just make that disaster worse, she added.

In the long term, however, it is going to be impossible to stop the virus from entering Tonga or any other community, Petousis-Harris said.

Nearby Samoa, with a population of 205,000, is also trying to prevent its first outbreak. It restricted movement after 15 passengers on a plane from Australia last week tested positive. By Thursday, that number had grown to 27, including five front-line nurses who had treated the passengers.

Fishing will be permitted

While the appearance of the virus has caused restrictions, there were signs that not all traditional qualities of island life would be lost for long.

Kiribati declared on Thursday people could return to fishing. But only four people will be permitted "to be on a boat or part of a group fishing near shore."

Nick Perry and Sam Metz reported on this story for the Associated Press. Jill Robbins adapted it for Learning English.

For more of the words related to COVID, see The Language of an International Health Crisis

dock – n. an area of water in a port where ships are loaded, unloaded, or repaired

shore – n. the land along the edge of an area of water (such as an ocean, lake, or the like)

What do you think of the spread of COVID to distant islands? We want to hear from you. Write to us in the Comments Section.