Update Required To play the media you will need to either update your browser to a recent version or update your Flash plugin.
By Bryan Lynn
14 June 2020


The economic slowdown caused by the coronavirus led to a sharp drop in shipping traffic around the world. This has given scientists a rare chance to observe quieter oceans.

One international project has been launched to listen to the sounds of the sea to study how the reduced shipping activity has affected sea life.

Many scientists have long dreamed of the chance to observe the sounds of a quiet ocean. One of them is environmental scientist Jesse Ausubel. He leads the Program for the Human Environment at The Rockefeller University in New York.

Eleven years ago, Ausubel dreamed aloud about the possibility during a speech to university students. He asked: What if scientists could record the sounds of the ocean in the days before engine-powered ships and boats began traveling the world?

In such an environment, researchers could listen to underwater communications between blue whales hundreds of kilometers apart. They could record the sounds of groups of dolphins. Scientists could carry out the observations without human influences, with the goal of understanding the ways industrial activity affects sea life. 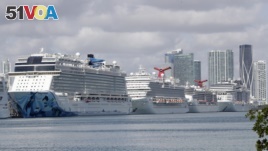 Cruise ships are docked at PortMiami, Tuesday, March 31, 2020, in Miami. The U.S. Coast Guard said Tuesday that it's working with Holland America on a detailed docking plan that would require two ships carrying passengers and crew from an ill-fated cruise to handle all medical issues without impacting South Florida's already-stressed hospitals. (AP Photo | Wilfredo Lee)

Ausubel told the Reuters news agency that at first he suggested one year of "quiet ocean," a period during which shipping would come to a halt, or at least be greatly slowed down. But he realized that such a period was not realistic and dropped his goal to one month. Then, finally, he hoped for just a few hours.

His desire to create a quiet ocean experiment drew interest from about 100 supportive scientists. In 2015, the group published a plan of how to carry out the International Quiet Ocean Experiment, if the right possibility ever presented itself.

That chance came in March, when the coronavirus led to an extreme economic slowdown that halted shipping traffic. Leaders of the experiment quickly organized efforts to establish a network of listening stations to pick up ocean sounds across the world.

The stations use hydrophones, instruments used for listening and recording underwater sounds. In May, the group reported it had helped set up 130 underwater listening stations.

The hydrophones were already in place, including six stations that had been set up to listen for underwater nuclear tests. But the group reported recently that it was working with the hydrophone operators to collect data that will be closely examined.

One of the project's supporters is Peter Tyack, a professor of marine mammal biology at the University of St. Andrews in Scotland. "Well, we're not excited that (coronavirus) happened, but we're happy to be able to take advantage of the scientific opportunity," he told Reuters. "It would have just been impossible any other way."

Tyack says the recordings should give scientists a never-before look at the oceans with little human interference. Generally, the group will be looking to see if whales and other sea mammals changed behaviors because of the quieter oceans. For example, they will examine whether the animals used quieter signals to each other, communicated more effectively or changed habitats.

The group hopes to publish its first results this summer, followed by a full report next year on how the reduction in shipping changed the behavior of ocean mammals and other sea life.

There has already been some anecdotal evidence of such behavioral changes, Ausubel said. "There have been observations near Vancouver of orcas coming closer to the city than was customary, and off Scotland," he said.

Ausubel noted that orcas, dolphins and humpback whales communicate using high-frequency sounds that do not travel far. So they often gather in less deep waters. He said this may have caused some animals to move closer to once-busy ports.

Bryan Lynn wrote this story for VOA Learning English, based on reports from Reuters and the International Quiet Ocean Experiment. Hai Do was the editor.

take advantage of – phr. to use (something, such as an opportunity) in a way that helps you : to make good use of (something)

opportunity – n. a situation in which it is possible to do something

mammal – n. an animal that feeds babies on milk from its body

anecdotal – adj. consisting of things people have said and not based on fact

customary – adj. normal or expected for a particular situation

high-frequency – adj. a frequency of 3–30 megahertz