Update Required To play the media you will need to either update your browser to a recent version or update your Flash plugin.
By VOA
13 March, 2014

Today on the show we hear from the new album by country star Dierks Bentley.

But first, a report on the art and science of beer making.

People have enjoyed beer for thousands of years. Beer is a popular alcoholic drink in many countries, including the United States. The US has several major beer manufacturers, such as Anheuser-Busch and Miller. But the country is also home to hundreds of small brewing companies. Marsha James tells us about one such brewery in California.

A passenger train passes Golden Road Brewery, a small beer producer and restaurant in the city of Los Angeles. Golden Road Brewing opened two years ago in an industrial part of LA. It is housed in old railway buildings.

Inside the owners and brewers hold a weekly meeting to taste the product.

"This is our first taste of a lot of the barrel-aged beers that we've been working on anywhere from six months to two years."

Each brew has its own special balance of flavors.

Co-owner Tony Yanow makes changes to the mix of malt and hops, two ingredients, for every kind of beer. Sometime he makes the beer taste like coffee or fruit. The process has many steps. It starts with crushing grain. The resulting liquid must be boiled and made clean, says Mr. Yanow.

"Basically, you've taken a liquid from here and the liquid has almost no solid in it at all."

Then the brewers add yeast, which makes the mixture turn to alcohol.

Tony Yanow says specialty beers, known as craft beers, are a small part of the beer market. But he says demand is growing.

He says that as beer drinkers develop their taste for the drink, beer makers are creating new products.

"People are pushing the boundaries right now and finding new and interesting ways to experiment with beer and push the limits of what beer actually is."

At Golden Road Brewing, there are seasonal beers, like Better Weather IPA, sold from November through February. A spring summer beer, Heal the Bay IPA, supports a local environmental group. Tony Yanow says that making craft beers is an art and science. He says it also about connecting with the local community.

Dierks Bentley is at the top of Billboard Magazine's country charts. His album "Riser" came out February 25th. It sold 63,000 copies in its first week. Caty Weaver plays us some of the songs on "Riser."

That is "I Hold On" from Dierks Bentley's new album Riser. The song is currently number five on Billboard's hot country songs chart. It has been on the chart for 27 weeks now. 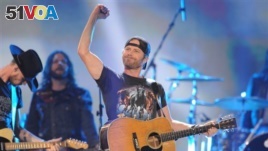 Dierks Bentley performing at the American Country Awards in 2012.

Dierks Bentley has had a lot happen in his life in the last couple of years. His father died in 2012. His first son was born the next year. "Riser" is an emotional album. Bentley told a reporter that the song "Here on Earth," is inspired by his Dad. It is about the unanswerable questions that come up when someone dies.

Dierks Bentley sings that there is answer here on earth.

Dierks Bentley also sings about romantic love and the hurt when it ends. "Bourbon in Kentucky," is how one heartbroken man eases his pain when the woman he wants stops wanting him. Bentley sings "there ain't enough bourbon in Kentucky to make me forget you."

Dierks Bentley is doing a series of shows in support of "Riser." This weekend he is in Ireland and Britain. Next week he'll be back in the United States. Bentley has said he misses his family when he is gone. But he says music is his love too.

We leave you with the title song from Dierks Bentley's new album "Riser."