Crash of Galaxies May Have Created Solar System

Update Required To play the media you will need to either update your browser to a recent version or update your Flash plugin.
By Alice Bryant
05 June 2020


A violent event of a massive size may have led to the birth of our solar system, scientists say. That event was the crashing of two galaxies.

The coming together of our galaxy and a smaller one caused countless stars to form in the Milky Way more than 4.5 billion years ago, scientists reported last week.

The smaller galaxy is called Sagittarius. It is 10,000 times smaller than the Milky Way. 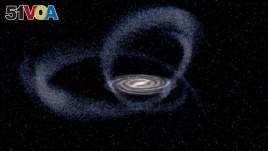 The star formation triggered by the Sagittarius dwarf galaxy in its current approximation to the Milky Way is seen in an illustration released May 26, 2020. (Gabriel Perez Diaz, SMM (IAC)/Handout via REUTERS)

A crash between galaxies usually does not involve stars hitting each other, the scientists noted. But it can create conditions for star formation. For example, it can increase the amount of gas in a galaxy or cause gas clouds to come together.

The Reuters news agency says the two galaxies first crashed more than six billion years ago. Since then, Sagittarius has passed through the Milky Way and its nearly 100 billion stars two more times. The scientists link all three events to a sharp jump in Milky Way star formation.

Tomás Ruiz-Lara is an astronomer at the Instituto de Astrofísica de Canarias in Spain. He was the lead writer of a report on the research.

He says galaxy crashes are not like car crashes. Some parts of Sagittarius and the Milky Way intersect, but a crash between stars would be "really, really rare," he said.

"First, we have the addition of material, gas, from Sagittarius that increases the amount of gas in our galaxy to form new stars," he said. Second, there is the collision between gas clouds from Sagittarius and gas clouds from the Milky Way, which also led to star formation. Third, the crash causes gravitational instabilities that can lead to star formation, he said. This happens because of changes in the density of the gaseous matter in the usually low-density space between star systems.

The report on galactic interactions appears in the publication Natural Astronomy.

solar system - n. our sun and the planets that move around it

galaxy - n. any of the very large groups of stars that makes up the universe

Milky Way - n. the galaxy in which we live that contains the stars that make up the Milky Way

intersect - v. to meet and cross at one or more points

instability - n. the state of being likely to change

density - n. the quality of having parts that are close together