Update Required To play the media you will need to either update your browser to a recent version or update your Flash plugin.
By Susan Shand
05 May, 2018


It has been 25 years since a major Hollywood movie company has released an English-language film with mostly Asian actors.

The last was Wayne Wang's film "The Joy Luck Club," which was released in 1993.

Now, many people in Hollywood are excited about a romantic comedy called "Crazy Rich Asians." The film is based on Kevin Kwan's best-selling book about a Chinese-American woman who gets a culture shock when she meets her boyfriend's family in Singapore. 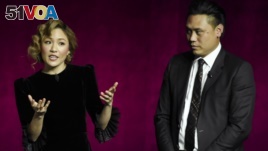 Longtime producer Nina Jacobson said that when she and her business partner Brad Simpson read Kwan's script, they knew it had to be a movie.

Jacobson said, "It was so specific that it became really universal: Anybody who has ever faced in-laws who felt that they were not worthy of their beloved."

However, Jacobson and Simpson believed the film would likely never survive the film studio development process. They decided to have a plan, a script and a budget to sell together before going to the big studios to create the film.

John Penotti of Ivanhoe Pictures agreed to help them and Warner Bros. agreed to partner with them and release the film.

Hollywood has been wrong to avoid films that closely examine the world of different ethnicities, Simpson said. She added that successful films like "Black Panther" show people really like these kinds of films.

Jon M. Chu is the director of "Crazy Rich Asians." He heard about the new book from his family. He knew why. His last name is the same as that of the main character, Rachel Chu. Also, both are from Cupertino, California. His family is even mentioned in the book.

I think a lot of Asian-Americans go through the same journey, Chu said. He said that he feels both American and Chinese.

"I remember going to Asia for the first time and there's a very specific emotion that you feel that's like, ‘Oh, this feels like home but it's not my home and these people don't see me as being part of this,'" he said.

Having known Jacobson and Simpson for years, he knew they would "protect" the film and do it the right way. He wants people who see the movie to see an unbelievable world of wealth and tradition.

Chu asked Malaysian-born screenwriter Adele Lim to give the script an Asian "feel." Then, company officials looked in Canada, New York, Los Angeles, Beijing, Shanghai, Hong Kong, London, Australia, Singapore and Malaysia for the right actors. Candidates had to be English-speaking and have the right accents.

Constance Wu was chosen to play the lead, Rachel. They found Henry Golding, a popular TV host to play Rachel's boyfriend, Nick. He had the right English accent to play the London-schooled wealthy young man.

International actress Michelle Yeoh was chosen to be his disapproving mother, Eleanor.

Some people – especially on the internet – said the actors did not have the "right" ethnicities to match the ones written in the book.

However, Chu said that having a film with an Asian-American lead is important. A USC Study found that 44 of the top 100 films from 2016 did not have Asian-American speaking characters.

Wu said he has never played the main character in a movie since he finished drama school. He added that parts for Asian-Americans are not going to be complex until they get to play main characters.

Actress Michelle Yeoh was different from the rest of the actors, Chu said. She had acted in majority Asian films so she did not understand why the film was so important to the Asian-Americans and it shocked her.

Jacobson said making the film created a "joyful sense of purpose that we all shared."

Wu also is a strong supporter of Asian representation on social media. He said the film is important because it shows the difference between the Asian experience and the Asian-American experience.

The film is expected to open on August 17. However, the film trailer already has been released and an early showing of the movie received good comments.

Chu said that if the film is successful, Hollywood will make more stories about Asian-Americans.

Susan Shand adapted this story for Learning English based on a report from the Associated Press. Mario Ritter was the editor.

in-laws – n. the parents of one's husband or wife

beloved – n. the person one loves

studio – n. the company that produces a film

character – n. a player in a film

journey – n. a trip or adventure