Update Required To play the media you will need to either update your browser to a recent version or update your Flash plugin.
By Bryan Lynn
06 October 2021


Two scientists have won the Nobel Prize in Chemistry for developing a molecule-building tool that can produce many important compounds in a "greener" way.

The Royal Swedish Academy of Sciences announced the awards Wednesday for Germany's Benjamin List and Scotland-born David MacMillan. List is with Germany's Max Planck Institute, while MacMillan is a professor at America's Princeton University.

Work by the two scientists has permitted researchers to more effectively produce molecules for things like medicines and pesticides and with less environmental harm. The academy called the winners' development method "an ingenious tool for building molecules."

The process of making molecules requires the linking of individual atoms together in specific positions. This can be very slow and difficult. For many years, chemists had only two methods -- or catalysts -- to speed up the process. These used either complex enzymes or metal catalysts.

That all changed in 2000, when List and MacMillan independently reported that small organic molecules can be used to do the same job. 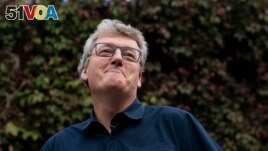 David W.C. MacMillan, one of two winners of the Nobel Prize for chemistry, smiles as he is interviewed outside the Frick Chemistry Laboratory and Department of Chemistry at Princeton University, Wednesday, Oct. 6, 2021, in Princeton, N.J. (AP Photo/John M

The process has made the production of some drugs easier, including an antiviral and an anti-anxiety medication, the academy said. It noted that an estimated 35 percent of the world's total Gross Domestic Product, GDP, "in some way involves chemical catalysis."

Jon Lorsch is director of the United States National Institute of General Medical Sciences. He likened the scientists' work to "molecular carpentry."

"They've found ways to not only speed up the chemical joining," he said, "but to make sure it only goes in either the right-handed or left-handed direction."

Johan Aqvist, chair of the Nobel panel, called the new method as "simple as it is ingenious." "The fact is that many people have wondered why we didn't think of it earlier," he added.

H.N. Cheng is president of the American Chemical Society. He said the two winners had developed "new magic wands." He added that before their work, the usual molecule building methods often resulted in environmental damage or harm. 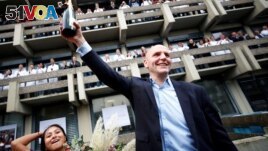 German scientist Benjamin List, who shares the 2021 Nobel Prize in Chemistry together with David MacMillan for the development of asymmetric organocatalysis, celebrates with well-wishers at the Max-Planck-Institute for Coal Research in Muelheim an der Ruh

Speaking after the announcement, List said the award came as a "huge surprise." He said at the beginning he did not know that MacMillan was working on the same subject, and he thought his effort might turn out to be, what he called, a "stupid idea." But he added: "When I saw it worked, I did feel that this could be something big."

MacMillan said the start of his catalysis work was "a pretty simple idea that really sparked a lot of different research."

carpentry – n. the activity of making and repairing wooden objects

spark – v. to cause the start of something