Update Required To play the media you will need to either update your browser to a recent version or update your Flash plugin.
By Anne Ball
23 October, 2016


Scientists in Scotland are using modern technology to examine the bones of a large sea creature that lived 170 million years ago.

First found 50 years ago in Scotland's Isle of Skye, the bones of the sea monster were trapped in hard rock — until recently. Thanks to technology, scientists are finally able to separate the bones from the rock.

What they discovered was a reptile that lived in the oceans at the time of the dinosaurs. Until now, this creature was unknown to researchers.

Reptiles are cold-blooded animals. They produce eggs and have hard, flat scales covering the outside of the body. Examples of modern reptiles are snakes, turtles and alligators.

The scientists in Scotland are excited to see that the skeleton of the ancient reptile is almost complete.

Stephen Brusatte is a paleontologist with the University of Edinburgh. He studies fossilized bones of ancient animals and plants. Now he is studying the sea monster's fossils.

"There's over 100 bones there, so a whole bunch of the skeleton, and now we get to get down to the fun business of actually studying it, figuring out what it is."

This is what the scientists already know: the sea monster was more than 4 meters long. They say it was from a class of ancient sea creatures called ichthyosaurs.

Ichthyosaurs looked something like modern dolphins. They could swim fast. The ancient reptile fed on fish and other sea life with its hundreds of cone-shaped teeth. 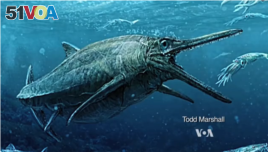 The scientists hope that studying the bones will give them a better understanding about the reptile's ecosystem. The sea monster lived during Earth's Middle Jurassic period. It lasted from about 160 million to 180 million years ago.

Only a few fossils have been discovered from that time, Brusatte explains, which makes this sea monster a great find.

"It's one of the only good skeletons of one of these ocean reptiles from the middle part of the Jurassic Period. This was a time that was a really interesting moment in evolution. You had all kinds of new groups of dinosaurs and ocean reptiles getting their start, starting to spread around the world."

The sea monster, like other ichthyosaurs, died out 95 million years ago. That is about 30 million years before the dinosaurs disappeared from the planet.

Paleontologist Brusatte says changes in their watery environment means the monster did not die out suddenly, but slowly disappeared.

"It looks like it was changes in the oceans, in the chemistry and in the ecology of the oceans, and so you had a long-term winnowing away of these ichthyosaurs as they became less and less common, less and less diverse, until they trickled away to extinction. And then that is when groups like sharks and, ultimately, whales and dolphins moved on in."

Sea monsters have been at the center of many stories people have told throughout history. In modern times, people tell the story of the Loch Ness Monster in Scotland. It has been described as large in size, with a long neck and one or more areas of skin rising out of the water. But no one has ever proved it really exists.

The sea monster being studied in Scotland does not come from someone's imagination, but in fact, once lived in the water until it died and its bones became trapped in rock.

In the future, its skeleton will be made available for people to see.

This story was written by Deborah Block for VOA News. Anne Ball adapted it for Learning English. George Grow was the editor.

paleontologist – n. a scientists who studies fossilized bones of ancient animals and plants

reptile – n. an animal that has cold blood, that lays eggs, and has a body covered with scales or hard parts

cone – n. a shape that is pointed on top and sides that form a circle at the bottom

ecosystem – n. everything that exists in an environment

winnow – v. to remove things that are less important form a larger group

trickle – v. to flow or fall in drops

hump – n. a rounded lump on the surface of something