Update Required To play the media you will need to either update your browser to a recent version or update your Flash plugin.
By Bryan Lynn
30 June, 2016


The new president of the Philippines has promised to be "relentless" in the fight against crime.

Rodrigo Duterte was sworn in Thursday. He won the office on his promise to defeat crime and corruption within six months.

Duterte is known for carrying out strong policies to crush crime as mayor of Davao, the country's second largest city.

During his swearing-in speech in Manila, the leader defended his methods for cutting crime.

He also said that as a lawyer, he knows "the limits of the powers" of the president. "You mind your work and I will mind mine. I know what is legal and what is not," he said. 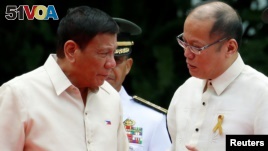 The accusations were investigated in 2009, but the case never went to trial. Many people in Davao say they forgive Duterte for any death squad activity because the city is safer.

Duterte appealed to voters who consider crime, government corruption and poverty as major problems. Many Filipinos also liked his outspoken style during the campaign. He sometimes used offensive language, made threats and told crude jokes.

The spokesman for the city of Davao, Leo Villareal, said Duterte was successful in reducing crime because he was unpredictable. He said no one could stop Duterte as a result.

The new president said he would be "relentless" during his "sustained" fight against corruption, criminality and illegal drugs. But he also said these problems are only signs of a disease affecting all of Philippine society.

Duterte demanded openness and honesty in government and equality for people for both wealthy and poor people.

Some political observers have raised concerns that the president's main goal of fighting crime and corruption could slow the country's economy. The Philippines saw continued economic growth under former president Benigno Aquino.

Duterte is the first president to come from the country's south, where a Muslim rebellion has continued for years.

Harvey Gamas teaches at Ateneo de Davao University. He said the president's roots might help him deal with the separatist problem.

Duterte met with two rebel groups in mid-June to propose a federal system of government to give Muslims more self-rule.

Another issue Duterte is expected to deal with is the Philippines' relationship with China. The two countries have been in dispute since 2012 about territorial rights in the South China Sea.

Vietnam, Brunei, Malaysia and Taiwan also claim territory in the area. In recent years, Chinese crews have built islands in the sea, complete with airfields.

China's official news agency Xinhua reported Thursday that President Xi Jinping sent a message of congratulations to Duterte. He said he was "willing to work with Duterte to push for improvement of relations between the two countries."

Ralph Jennings reported this story for VOANews. Bryan Lynn it for Learning English with additional information from Associated Press and Reuters. Caty Weaver was the editor.

death squad – n. a group of people given the task of killing others, usually with the indirect approval of government

sustained – adj. continuing for an extended period of time