Critic Rates the Songs of Springsteen in New Book

Update Required To play the media you will need to either update your browser to a recent version or update your Flash plugin.
By VOA
12 June, 2014

On the show today, it's all about "The Boss" Bruce Springsteen.

Musician, singer, songwriter Bruce Springsteen is one of the world's best-selling artists, with a career that covers 40 years. In a new book, "Counting Down Bruce Springsteen," writer and music critic Jim Beviglia rates Springsteen's songs. The rating is based partly on how powerfully the words express people's fears, hopes and dreams. Christopher Cruise reports. 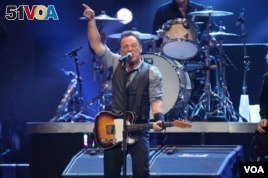 Bruce Springsteen performing at the 12-12-12 Concert for Sandy Relief at Madison Square Garden.
Bruce Springsteen is known for his poetic songs that deal with social and political issues, as well as more personal subjects. His energetic live performances are also famous. Music journalist Jim Beviglia says the artist's childhood in a New Jersey working class family was a major influence on his music.

"The social and the political issues, Springsteen's never been shy about writing about those. They sort of started to come into play with an album called, ‘Darkness on the Edge of Town,' where he started to look at small town lives and how people are just sort of doing the same things their parents did, and couldn't get out of that."

Mr. Beviglia says the music grew even darker in the 1982 album "Nebraska." He says those songs show people pushed to the edge of poverty and criminal activity.

Thirteen years later Springsteen released "The Ghost of Tom Joad." Mr. Beviglia says the album was a direct discussion of issues like immigration, hunger and poverty.

Then in 2012, in the album "Wrecking Ball," the critic says Springsteen found people to blame for some of those social problems.

"‘Wrecking Ball' really pointed at that sort of financial leaders and the powers that allowed that dichotomy between the rich and the poor."

One of Springsteen's best-known songs, "Born in the USA", is nine on Beviglia's list.

"It's an amazingly complex song, it's got this really rousing music, very patriotic, big drums, it's used in fireworks displays. But when you get to the lyrics, it's a very sharp criticism of the way America treated its Vietnam vets upon returning home."

The song was released in 1984 as President Ronald Reagan was running for re-election. Jim Beviglia says that conservative politicians and observers misunderstood the song.

"It came out in 1984 and a couple of conservative politicians sort of picked up on the song. They talked about how Springsteen sort of reflected the American values and Springsteen, when he found about that, quickly pulled back and he said ‘wait a second here, they're mistaking this song here, this is more of a criticism and maybe their values don't coincide with my values."

Springsteen also wrote about personal relationships. Mr. Beviglia places "Brilliant Disguise," in fifth place on his list of Springsteen's 100 finest songs. The song is from the 1987 album "Tunnel of Love."

"It's basically a couple who are putting on disguises for each other because they don't reveal their true selves. And there's mistrust and the relationship is kind of crumbling."

Mr. Beviglia says that was the state of Springsteen's marriage at the time. He and his first wife divorced shortly after.

He says Springsteen's album company was thinking of ending business with him after poor sales of his first two albums. But then "Born to Run" hit the stores and airwaves in 1975. It saved Springsteen's career.

"The lyrics, they leave you breathless, this idea of, you know, maybe we never can actually get free from our pasts, from our home towns, and things like that, but you have to give it a shot, and take your chance. You know it cost a lot of money to produce. He used all these instruments. Had it failed, I mean, we might not be talking about Bruce Springsteen today."

But we are - talking about him, and listening to him. Jim Beviglia says the musician's ability to stay true to himself and express the concerns and hopes of ordinary people is what has made him a living legend.