Update Required To play the media you will need to either update your browser to a recent version or update your Flash plugin.
By Gregory Stachel
30 October 2021


The Guilford school system in the northeastern American state of Connecticut is seeing organized opposition from local and national groups. The opposition comes after efforts to look at issues of race and fairness in schools and teaching materials.

School leaders started the efforts after the killing of George Floyd last year. His death led to worldwide protests over the treatment of Blacks in the United States. But concerns over racial issues had been raised earlier in Guilford after a student wore black facial paint at a football game. There also was a dispute over the use of an image of Indians to represent the school system. The concern was that these issues are considered offensive to Blacks and Native Americans.

For years, schools across the U.S. have been teaching diversity and cultural issues without much criticism. But the debate over face-covering requirements, shared bathrooms use by children of both sexes and teachings on race have increased interest in school board elections.

Jeffrey Henig is a political science and education professor at Columbia University. He said the recent anger over these issues has been increased by national groups with bigger plans.

Some members of the Republicans Party, he said, see these issues as ones that can help them win suburban voters in upcoming elections. Henig explained that is why the school board elections were "getting the energy and attention" that they have been getting. 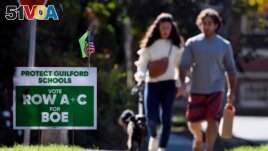 People walk near one of many signs around town centered around the upcoming Nov. 2 election, seen on Tuesday, Oct. 19, 2021. The school system is seeing opposition to the efforts made to gain equity and inclusion in schools in Guilford, Conn. (AP Photo/Jessica Hill)

Guilford is a largely white town of 22,000 on the coast of Connecticut. It is a suburb of the more diverse city of New Haven, home to Yale University.

The work has included a review of study materials to include books from writers with diverse experiences and backgrounds. He said, for example, students also learn about enslaved people who lived in Guilford during the Colonial period.

Opponents criticized Freeman for asking school administrators to read books including "White Fragility: Why It's So Hard for White People to Talk About Racism."

A national group, called No Left Turn in Education, organized a June meeting in Guilford on what they see as the threat of critical race theory.

This summer, conservative activists won the Republican Party's support for the school board. They called for Freeman's removal and hoped to gain control of the school board in the November elections.

Their goal is to fight critical race theory which has become the top issue for conservative activists in school board races across the U.S. A woman walks her dog past a sign supporting equity in schools, in Guilford, Conn., on Tuesday, Oct. 19, 2021. (AP Photo/Jessica Hill)

Critical race theory (CRT) argues that the country's institutions work to keep white people as the most powerful group. The term has been used to identify many different ideas. The theory has been discussed mainly at the college level. Many say it is not a part of instruction for students from young children to high school.

Danielle Scarpellino is a local business owner. She is one of five candidates who opposed critical race theory. She said in a recent appearance on Fox television that Guilford school leaders were introducing politics into schools. She said students were "being used as political pawns."

Tim Chamberlain is another candidate. He said on his campaign website that his child's teachers have "tried to persuade him to abandon his conservative viewpoint" while discussing issues like climate change and affirmative action.

Freeman said the accusation that his teachers are teaching political beliefs "could not be more wrong."

Kristy Faulkner is a molecular biologist. She said she is running for the school board after seeing words like equity and inclusion turned into bad words by her opponents.

She said she also worries that if her opponents win, they would not find any middle ground with the current school board members.

The head of Guilford's nine-member school board is Kathleen Balestracci who is not up for reelection. She is a researcher at Yale School of Medicine and a member of the Democratic Party.

She said that students and community members asked the schools to create policies on equity and inclusion. She said she has often heard from parents seeking information on policies during her 10 years on the board. But she said she has never seen such anger.

Balestracci said when she tried to explain the policies now, some said, "You're lying."

Michael Meila reported this story for The Associated Press. Gregory Stachel adapted it for VOA Learning English. Hai Do was the editor.

review – n. an act of carefully looking at or examining the quality or condition of something or someone: examination or inspection

abandon – v. to give up (something) completely

affirmative action – n. the practice of improving the educational and job opportunities of members of groups that have not been treated fairly in the past because of their race, sex, or something else