Update Required To play the media you will need to either update your browser to a recent version or update your Flash plugin.
By Phil Dierking
19 March, 2018


United States lawmakers are calling for more regulation of Facebook. The move comes after reports that the social media company may have let a political organization have access to personal data from around 50 million Facebook users in 2014.

Facebook wrote about the issue on Friday in a public online message, just before news media began reporting on the story.

Reports said that Cambridge Analytica was given access to the data. The data company is linked to conservatives and is known for its work on Donald Trump's 2016 presidential campaign. The reports also say the company may not have deleted, or removed, the data.

Facebook announced late Friday it was banning Cambridge Analytica from its service for misusing data. 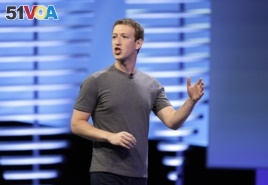 The reports are the latest threat to Facebook's public image. It has been criticized over Russia's use of Facebook to influence American voters during the 2016 election.

Facebook claims the data was misused, not stolen. It says users gave it permission. The company's position has led to a debate about what is considered a "hack" that users must be told about.

How to keep online information safe

Frank Pasquale is a University of Maryland law professor. He has written about Silicon Valley's use of data. He said that Facebook's explanation that data had not been stolen avoided the central issue that data was used in a different way than users expected.

Senator Mark Warner, a Democrat, said the event proves the need for new regulations about internet advertising. He described the industry as the "Wild West." He said that without new regulations, the market will continue to deal with deception and secrecy.

Both The New York Times and London's Observer reported Saturday that private information from more than 50 million Facebook users was wrongly given to Cambridge Analytica. They also reported that the company had not deleted the data, even though Facebook told them to beginning in 2015.

The reports say that about 270,000 Facebook users gave a researcher permission to use their data. The researcher also took the data of all their friends, a move that was permitted based on Facebook's rules until 2015.

The researcher then sold the data to Cambridge Analytica. That move was against Facebook rules, the newspapers said.

Facebook said in a series of statements over the weekend that researchers and Cambridge Analytica broke Facebook rules. It said it was considering legal action against them.

In answer, Cambridge Analytica said that they had, in fact, deleted the data. It also said the company supplying the data was responsible for obtaining it.

Andrew Bosworth, a Facebook vice president, said the company could make more changes to demonstrate that it values privacy. "We must do better and will," Bosworth wrote on Twitter.

Nuala O'Connor is president of the Center for Democracy & Technology in Washington, D.C. She said Facebook was depending on the honesty of people rather than preparing for the planned misuse of data.

O'Connor also added that Facebook knew about the abuse in 2015 but did not inform users until Friday. "That's a long time," she said.

Massachusetts Attorney General Maura Healy said on Saturday she was launching an investigation into the use of Facebook data.

Healey's office said she wants to understand how the data was used, what policies may have been abused, and what the legal effects are.

This story was originally written by David Ingram for the Reuters News Agency. Phil Dierking adapted it for VOA Learning English with additional information. Ashley Thompson was the editor.

What kind of security polices do you think Facebook should have? We want to hear from you. Write to us in the Comments Section or on 51VOA.COM.

regulation - n. an official rule or law that says how something should be done

delete - v. to remove (something, such as words, pictures, or computer files) from a document, recording, computer, etc.

hack - v. to secretly get access to the files on a computer or network in order to get information, cause damage, etc.

Wild west - expression. meaning wild or having no laws

deception - n. the act of making someone believe something that is not true

source - n. someone or something that provides what is wanted or needed

obtain - v. to gain or get (something) usually by effort