Update Required To play the media you will need to either update your browser to a recent version or update your Flash plugin.
By Caty Weaver
12 November, 2018


During the fall, Zisis Kyrou is more likely to be picking crocus flowers in northern Greece than be in his office at work. But he is not doing so for fun. It is profitable.

Kyrou, who is 34, gathers crocuses outside his hometown of Krokos to produce the spice saffron. Spices are used to improve the taste of foods. And saffron is a favorite. People pay so much money for it that it is often called "red gold."

Saffron has brought jobs and money to an area of Greece that is better known for coalmines and unemployment. A year ago, area saffron producers began exporting to the United States. Now they are looking to China.

Most of the saffron producers are young Greeks who could not find jobs during Greece's nine-year economic crisis. They began farming as a result.

"It was hard to find work in your field during the crisis, particularly in civil engineering, because there was no construction," Kyrou said.

In 2012, Kyrou returned to Greece from London with two university degrees. He opened an engineering office in his village of Krokos, but he makes more money from his 1.6 hectares of land.

Krokos gets its name from the flower. And the area surrounding the town has been growing crocus flowers for 300 years. But until 2000, saffron production was limited to 30 kilograms a year for sale within the country, said Nikos Patsiouras, head of Greece's Cooperative of Saffron.

That changed with the 2008 international economic crisis, which became the Great Recession. Greece began increasing saffron production, now making about four tons a year. Seventy percent of that is exported.

"A lot of young people found work in the fields - scientists," Patsiouras said. "I believe more will join." 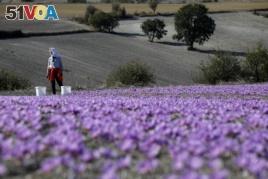 Evangelia Patsioura pauses as she harvests saffron flowers at her family's field in the town of Krokos, Greece, October 27, 2018. (REUTERS/Alkis Konstantinidis)

Signs of economic hardship can be seen throughout Krokos. Many stores that line the streets are permanently closed. Unemployment in northwestern Greece is 23.5 percent.

But the fields are busy places of industry.

"We have God on our side, who gave us such a unique product," Patsiouras said.

Saffron grows in many countries. Greece markets its as Krokos Kozanis. One gram costs about four euros in Greek stores.

It takes about 150,000 flowers to make a kilogram of the spice, which sells for about 1,500 euros. Flowers are gathered by hand. Women of the Cooperative weigh and package the spice.

Iran is by far the world's biggest saffron producer, but demand for the Greek kind is rising, Patsiouras said. Greece is in talks with China to begin exporting its product there in 2019.

Reuters reported this story. Caty Weaver adapted it for Learning English. Ashley Thompson was the editor.

package – n. to put (something) in a package in order to sell it or send it somewhere