Cruz Over Trump, While Dems in Dead Heat

Update Required To play the media you will need to either update your browser to a recent version or update your Flash plugin.
By Caty Weaver
02 February, 2016


U.S. presidential candidate Ted Cruz has won the Republican party contest in the Iowa caucuses, the first in the United States.

At this writing, Hillary Clinton has support of 49.8 percent of voters. Bernie Sanders had 49.6 percent. 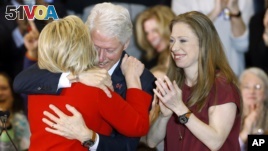 The only other Democratic Party candidate, Martin O'Malley received less than one percent. The former governor of Maryland announced earlier in the vote count that he would suspend his campaign.

Texas Senator Cruz finished the night with 28 percent of the Republican Party vote. He thanked his supporters in Iowa after the results were announced. He called his win a victory for "courageous conservatives" across Iowa and the United States.

Both congratulated each other. Clinton suggested that she and Bernie Sanders had generated an important conversation among Democrats. Senator Sanders of Vermont thanked Clinton for her "vigorous" campaigning.

Sanders said Iowans sent a clear message in their support of him. He said the American people have said that it is "too late for establishment politics and establishment economics."

Former Secretary of State Hillary Clinton spoke of what she will do for the country. She brought cheers when she said, "I am a progressive who gets things done for people."

Republican businessman Donald Trump came in second with 24 percent of the vote. Trump has led the pack of Republican candidates for months. The New York Times called his second-place finish "humbling."

But the biggest surprise among the Republicans was how well Marco Rubio did. The Florida senator finished close behind Trump with 23 percent of the vote.

At a hotel in Des Moines, Rubio appealed to undecided voters as he warned that the nation had reached a "turning point."

"I believe with all my heart that if I am the nominee, I can unite this party, because if we are not united, we cannot win," said Rubio.

At another caucus site in the capital, Trump told supporters that he was the candidate that can "bring our country back."

The other Republican candidates each received percentages in the single digits. One of them, former Arkansas governor Mike Huckabee, has now suspended his presidential campaign.

The results in Iowa are providing the first firm evidence of voter sentiment, after a year of fierce campaigning.

The voter turnout was strong. Large crowds filled churches, gymnasiums, and other public buildings across the largely rural state.

Iowa's first-in-the-nation vote is seen as an important way for candidates to gain energy in the U.S. primary election process. Such events will continue to be held state-by-state until around mid-June.

We want to hear from you. Post your message in the Comments section or on 51voa.com.