Update Required To play the media you will need to either update your browser to a recent version or update your Flash plugin.
By Dan Novak
23 October 2021


Adiel and Lachi hope to get married one day in Cuba. The two men want to dress in black for a ceremony by the seashore. But the idea of same-sex marriage troubles religious leaders and their followers.

Recently, the socialist government published a new proposal for a Family Law and asked for public comment ahead of a vote. The debate has since turned into a very public clash over same-sex marriage policy.

Thirty-one-year-old Adiel González is a student of religion. His 51-year-old partner, Lachi González, is an accountant. They both work at the Evangelical Theological Seminary in Matanzas.

Adiel said putting his right to marriage to a public vote is painful. He said it gives the majority of people who are heterosexual the power to decide over the minority of homosexuals.

Lachi added, "God has no stepchildren, so we are all daughters and sons of God and what Adiel and I do (is) have a life with love."

The proposed Family Law will be considered by Parliament after the still unscheduled vote. The bill has more than 480 articles. It expands grandparents' rights and permits financial agreements before marriage. The bill sets punishments for committing violence in a marriage. And parents can decide whether a child takes the family's name of the mother or the father.

However, the biggest issue is over changing the definition of marriage. Current law defines marriage as between a man and a woman. The new bill would change it to between two people.

The proposal would also permit homosexuals to adopt children and use surrogate pregnancies without payment.

Reverend Moises de Prada is a top clergy with the Assemblies of God. The group has grown quickly in Cuba and now has more than 2,000 churches and 1 million members.

He said the family structure, in the word of God, "is that which is agreed between a man and a woman and the resulting children."

Cuba is officially non-religious after the 1959 revolution led by Fidel Castro. But religious groups, including Catholics, Muslims, Protestants and Afro-Cuban religions, have become more influential over the past 25 years. Some campaigned in 2018 and 2019 against an earlier vote which would have rewritten the constitution to permit same-sex marriage.

Opposition from social conservatives was strong enough that the government at that time backed away. However, lawmaker Mariela Castro supported the change. She is the daughter of then-President Raul Castro and director of Cuba's Center for Sexual Education. 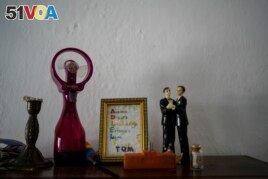 Justice Minister Oscar Silveira Martínez told The Associated Press that the new proposal "does not construct social realities; it tries to foresee legal solutions, protect those social realities that exist."

Assemblies of God leader Julio César Sánchez said such same-sex unions would be "the result of sin." He added, "because murder also exists. ... That doesn't mean it's good."

Carola Reyna is a 25-year-old housewife. She said she was not against same-sex couples being happy. "But it seems to me that (adopting) children, they shouldn't get involved in that," she said.

Nearby was 68-year-old Alberto Dausá. He told the AP, "There are people who are going to be against same-sex couples joining in matrimony, but I think that's something normal."

Andrea Rodríguez reported this story for The Associated Press. Dan Novak adapted it for VOA Learning English. Hai Do was the editor.

heterosexual — adj. sexually attracted to people of the opposite sex

homosexual — adj. . sexually attracted to people of the same sex

stepchild — n. your wife's or husband's child by a past marriage or relationship : a stepson or stepdaughter

article — n. a separate part of a legal document that deals with a single subject

adopt — v. to take a child of other parents legally as your own child

surrogate — n. a person or thing that takes the place or performs the duties of someone or something else

construct — v. to build or make (something physical, such as a road, bridge, or building)

foresee — v. to see or become aware of something that has not yet happened

sin — n. an action that is considered to be wrong according to religious or moral law

matrimony — n. the state of being married