Cubans Fleeing to US in Large Numbers

Update Required To play the media you will need to either update your browser to a recent version or update your Flash plugin.
By Bryan Lynn
05 September 2022


American immigration officials report a sharp increase during the past year of Cubans fleeing their country for the United States.

Most of the migrants fly to Nicaragua as tourists and then slowly make their way to the U.S. border. Many enter the states of Texas and Arizona. 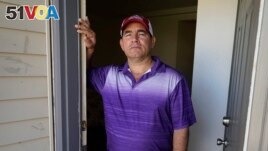 A smaller number attempt trips across the ocean. The U.S. Coast Guard reports it seized more than 4,600 Cubans from last October to this month.

Most of the migrants caught are released with orders to appear in immigration court or report to immigration officials.

It is the largest migration of Cuban exiles since the Mariel boatlift in 1980, when nearly 125,000 Cubans came to the U.S. over a six-month period.

The latest increase is fueled by Cuba's severe economic situation. The country's economy has been hit hard by U.S. sanctions and slowdowns linked to the COVID-19 pandemic.

Large demonstrations in Cuba last year led to widespread arrests and fear of increased political oppression. As a result, a growing number of Cubans began to flee. In November, fleeing became easier when Nicaragua stopped requiring visas for Cubans.

Reporters from the AP recently spoke with three men who shared their experiences fleeing Cuba. Two of the individuals did not want to be named because they fear for the safety of family members still on the island.

One of the men is Rolando José Cisneros Borroto of Camaguey, a city in central Cuba. The 42-year-old street seller said he was tired of going hungry. He said he decided to leave his wife and three children in hopes of finding more profitable work in the U.S.

He sold all his belongings and collected $13,000 for the trip. After taking six flights, he finally arrived in Nicaragua in June. From there, he travelled on land through Honduras and Guatemala to Mexico.

While hiding from Mexican police, Borroto said he spent days drinking water from a river and eating only grass. He finally crossed into the U.S. south of Del Rio, Texas, and surrendered to Border Patrol officials. He was released after three days of detention and now lives in Algona, Iowa, where a cousin offered him a room in his house and food. The trip lasted 36 days.

"I never thought it would take so much work to arrive," Borroto told the AP. "What one goes through along the way I do not advise anyone, but Cubans prefer to die on the way before staying in Cuba."

One of the other men told the AP he was jailed in Cuba for taking part in protests in July 2021. When he was temporarily freed to wait for a sentencing decision, he decided to flee.

Unemployed, he asked his father, who lives in Texas, for about $15,000 to pay smugglers to help him escape.

First, he travelled 400 kilometers to Ciego de Avila, a city in the center of the island. From there, a bus took him and 30 other passengers about 100 kilometers where a boat was waiting. Among the migrants were a pregnant woman and a 7-year-old boy.

The group passed through the Bahamas and, after 12 hours, arrived in the Florida Keys. A Cuban friend met him and took him to a house.

The third man built a raft out of aluminum tubes to carry him and three friends. The group left from a fishing port west of Havana in May 2021. With no GPS, the man said they used stars to navigate. After 22 hours, the group reached south Florida.

"The first thing one thinks of is leaving, that either we all die of hunger little by little, or we make an attempt," the man told the AP.

"I knew I could die in the water, but I needed to take the risk," he said.

The man is now seeking asylum and hoping to bring his wife and three teenage daughters to join him in the U.S.

The Associated Press and Reuters reported on this story. Bryan Lynn adapted the report for VOA Learning English.

tourist – n. someone who visits a place for pleasure and does not live there

raft – n. a small, flat boat usually made out of wood or rubber

smuggler – n. a person who moves goods or people from one country to another secretly and illegally