Cubans Seeking to Join Family in US Face Long Delays

Update Required To play the media you will need to either update your browser to a recent version or update your Flash plugin.
By Bryan Lynn
02 June 2022


Many Cubans seeking visas to join family members in the United States are facing long delays linked to processing problems.

U.S. officials say about 20,000 visa applications have built up in the government's Family Reunification Program. The program permits Cubans living legally in the U.S. to bring close family members from Cuba into the country.

The reunification program was effectively suspended in 2017 by the administration of President Donald Trump. The suspension was linked to the withdrawal of American diplomatic workers. The workers were pulled out of Cuba after a series of mysterious health incidents affected diplomatic workers there. 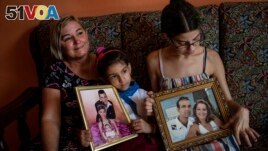 Danmara Triana, left, with her daughters Alice, center, and Claudia, show photos of them with their brother and father who moved to the United States in 2015, at their home in Cienfuegos, Cuba, Thursday, May 19, 2022. (AP Photo/Ramon Espinosa)

U.S. officials suspected the diplomats might have been targeted in some kind of attack – possibly from a foreign power – involving energy from radio waves. But U.S. intelligence officials now say the incidents were likely not the result of attacks.

The administration of President Joe Biden said in April it planned to restart the Family Reunification Program. But it has not set a date for increasing the number of U.S. diplomats in Cuba.

This means that family members waiting to leave Cuba will have to keep waiting for now.

Among those awaiting visas are family members of Roberto De la Yglesia. He left most of his family behind when he came to the U.S. with his only son in 2015. At the time, he hoped he would be able to bring his wife and daughters over soon after.

But years later, the mechanical engineer living in the northeastern state of New Jersey is still waiting to bring the rest of his family over.

"My day-to-day life hangs on this, to see my son, to see my husband," Triana said. The 48-year-old accountant repeatedly visits the website of the U.S. Embassy in Havana for news about the application process.

U.S. officials told Triana in 2017 that the family qualified for the Family Reunification Program. By 2020, they believed they had finished all the required paperwork and paid all application costs. But then the COVID-19 pandemic hit, slowing the visa issuing process even further.

The withdrawal of diplomats was only one of many steps the Trump administration took to isolate Cuba. The steps halted policies by former President Barack Obama that established closer ties.

Among more than 200 measures enacted by Trump were a ban on cruise ships, limits on money sent from the U.S. and restrictions on American visitors. Biden has announced that he plans to undo some – but not all – of the Trump administration measures.

With diplomatic operations slowed in Havana, U.S. officials have urged Cubans to seek visas in Guyana, on the South American mainland. But that choice is costly and unrealistic for most visa seekers in Cuba.

We want to hear from you. Write to us in the Comments section and visit out Facebook page.

application – n. a formal and usually written request for something (such as a job, admission to a school, a loan, etc.)

pause – v. to stop doing something for a short time

interview – n. a meeting in which someone asks you questions to see if you are qualified for a job or position

qualify – v. to be permitted to do or have something

cruise ship – n. a large ship that people travel on for pleasure