What Are Those Marks on the Olympic Athletes?

Update Required To play the media you will need to either update your browser to a recent version or update your Flash plugin.
By Dan Friedell
09 August, 2016


American swimmer Michael Phelps has won more Olympic medals than anyone in history. On Sunday night, he added another gold medal as a member of the USA 4x100-meter freestyle relay team.

But the red circular marks on Phelps' upper arms and shoulders received most of the attention. Television viewers wondered what caused the marks on his body. Athletes in other sports had similar marks.

It turns out they are bruises left behind from a treatment called cupping. Cupping is supposed to help athletes who have sore muscles feel better.

A study published earlier this year in the Journal of Bodywork and Therapies calls cupping "an ancient technique used in treating pain and various disorders."

Forms of cupping may have started over 5,000 years ago. It is practiced frequently in Asian countries but it is less common in the U.S and western countries. Sometimes the cups are applied with the help of heat. They are also applied using a suction device.

The glass or plastic cups are placed on the skin, and the suction device removes air. This creates a tight seal. The cups are kept in place for only a few minutes.

The journal's report, by Evgeni Rozenfeld and Leonid Kalichman, says it is not clear why some people benefit from cupping therapy. The theory is that pressure applied to the skin and nearby muscles from the cup stimulates blood flow. The blood flow may reduce pain in the area. The report says more studies are needed to learn about the effectiveness of the therapy.

Athletes and celebrities have posted photos to social media sites of themselves using cups.

Those watching Alexander Naddour of the USA Gymnastics team compete over the weekend also saw evidence of cupping. 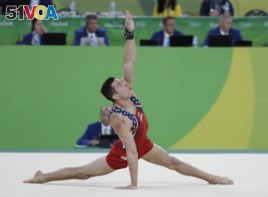 Naddour told USA Today that the cups were a "secret," that kept him healthy during training.

"It really speaks to this level of integration we're seeing with many things that are considered complementary medicine," he said.

Dan Friedell wrote this story for Learning English based on information from VOANews, CBS News and The Journal of Bodywork and Therapies. Hai Do was the editor.

What do you think about the cupping treatment? We want to know. Write to us in the Comments Section or on 51VOA.COM.

freestyle– n. an Olympic swimming event where athletes move themselves in the water using a crawling motion with their arms and kicking with their legs

relay – n. a race between teams in which each team member runs, swims, etc., a different part of the race

therapy – n. the treatment of a physical problem or illness

suction – n. the act or process of removing the air, water, etc., from a space in order to pull something into that space or in order to cause something to stick to a surface

disorder – n. a physical or mental condition that is not normal or healthy