Update Required To play the media you will need to either update your browser to a recent version or update your Flash plugin.
By Anna Matteo
15 September, 2018

Our weekly program is about the words, expressions and idioms we use in American English.

In any language, idioms can be difficult. Sometimes, you need to know a lot of ‘cultural backstory' -- the meaning behind the words -- to understand these sayings. And using them the right way can cause problems for English learners.

But do not worry. Even people who grew up in the United States speaking English have problems with some of these idioms.

On another Words and Their Stories, we told how the idiom "blood is thicker than water" is misunderstood. This week we talk about another expression Americans usually get wrong.

That expression is: Curiosity killed the cat.

I know. It does not sound very nice. But trust me. It's not that bad. 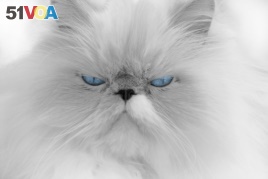 "You better not be talking about me!" Well, at least his face seems to be saying that.

The word curious means to want to know things you don't know; to investigate. So to be curious is not a bad thing. Adults and teachers often praise children with curious minds for asking questions -- sometimes a lot of questions!

Curious people can be very interesting. They want to know more about the world around them. Another way of saying curious is inquisitive. The verb "inquire" means to ask one or more questions.

However, prying is a form of curiosity but not in a good way. Someone who is said to be prying into other people's business wants to know about things that do not concern them. And often prying is an effort to find out secrets by looking for them in improper ways.

We often use it this way. We say to someone, "Look, I don't mean to pry ..." and then we go ahead and pry by asking them a personal question that is none of our business.

Sometimes when we pry we are simply concerned about someone. But it can still start trouble. So, as we said, curiosity is usually a good thing. But it can also put you in harm's way.

"Curiosity killed the cat" is an idiom we use to warn people. Being curious can get you into trouble. We often use this expression when others ask prying questions.

People asking such questions are trying to find out something that is none of their business. They are being nosy.

Okay, so now, let's hear an example of a nosy person asking prying questions by putting their nose where it does not belong.

So, last night I saw Tom out with a woman and it wasn't Jessica!

Really? They haven't broke up, have they?

I don't think so. You know, I'm having lunch with Jessica tomorrow. Maybe I'll ask her.

I wouldn't do that if I were you.

Why? Aren't you curious?

A little. But it's not a good idea to stick your nose into other people's business.

Well, you know what they say, "Curiosity killed the cat." Just leave it alone.

That last part really changes the meaning. The cat gets to live. Curiosity does not kill it. So, we use the first half of the saying as a warning: Be careful of the dangers of unnecessary investigation or experimentation! But the second part -- "satisfaction brought it back" -- shows that the risk might be worth it.

Not many English speakers know that in the original idiom the cat survives. But now you do! In the end, the way most Americans use the idiom is as a warning and they simply say "curiosity killed the cat."

And that's the end of Words and Their Stories for this week.

Anna Matteo wrote this story for VOA Learning English. George Grow was the editor. The song at the end is The Cure singing "Love Cats."

Oh you know that I'd do anything for you...

inquisitive – adj. tending to ask questions : having a desire to know or learn more

pry – v. to try to find out about other people's private lives