Cyclists Race Across America for Charity

Update Required To play the media you will need to either update your browser to a recent version or update your Flash plugin.
By VOA
18 June, 2017


Bicyclists are racing across the United States to raise millions of dollars for charitable causes.

The competition is called Race Across America. It is a yearly race that covers about 5,000 kilometers crossing deserts and mountains. About 270 racers are competing this year to see who can reach Annapolis, Maryland first from Oceanside, California.

The race's website shows that about 70 percent of cyclists have partnered with a charity.

Charity an important part of the race

Arvid Loewen is a 60-year-old competitor in this year's race. He has partnered with the Mully Children's Foundation orphanage in Kenya. He was born in Paraguay, but lives in Canada. He holds the Guinness World Record as the fastest man to cycle over 6,000 kilometers to cross Canada.

In 2005, he cycled with three Kenyan orphans across Canada. The teenage orphans would then talk about life in poor areas of Kenya and what the Foundation had provided them.

After his visit to the Mully Children's Foundation in Kenya, Loewen resigned from his job and became a volunteer for the organization.

"I understand poverty. I understand not having food. I've gone through some of that in my own personal life," he said. "So, when I talk about children that are starving. It becomes very real and personal for me." 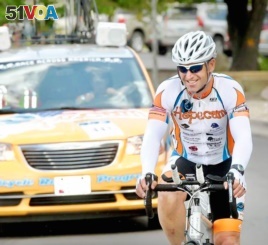 Len Forkas cycles during the 2012 Race Across America. He finished 10th in 2012 and won his age division. He started his charity HopeCam when his son Matt was diagnosed with cancer in 2002. His son is now a college graduate and does not have cancer.

Fifty-seven-year-old Len Forkas is cycling to raise money for his charity HopeCam.

The charity started in 2002 when his nine-year-old son was diagnosed with leukemia, which is a kind of cancer. His son became lonely because he was unable to attend school. Forkas set up a webcam to let his son see his classmates from home.

Thirty-one-year-old Jaco van Gass is part of an eight-man team of cyclists representing a charity called Help for Heroes.

The team served in the British Armed Forces and was wounded in Afghanistan. Van Gass lost his left arm at the elbow and has wounds on his leg. Help for Heroes' worked to help support their change to civilian life by providing treatment. Many members of the team ride bikes that were adapted by the charity for their needs.

Van Gass said he never would have had an interest in cycling or climbing if he had not been injured. Instead he would have placed all his attention on having a career in the military.

He said, "I do see it [my injuries] as a positive in a certain sense."

Besides cycling, mountain climbing was another opportunity.

Who would cycle across America in less than two weeks?

People in many age groups are competing in the race. The oldest racer this year is 74 while the youngest is 17.

About half of the cyclists are from the United States. The rest come from countries including the Philippines, Germany and Brazil. More than 30 cyclists are women.

Cyclists can either race by themselves or in teams of two, four or eight. Because cyclists could get injured miles from the nearest hospital, they travel with a support team.

Racers on a team have nine days to finish. Racers who cycle by themselves are called solo racers. They must complete the race in 12 days. Solo racers started on Tuesday, June 13 and team racers start on Saturday, June 17.

In order to complete the race in time, solo racers sleep very little.

In 2012, Len Forkas fell asleep on his bicycle while crossing the state of Colorado. He was speeding along a mountainous road when he woke up.

"I can't explain why I opened my eyes at that moment. But if I were to have slept for two more seconds, I would have catapulted over that guard rail." 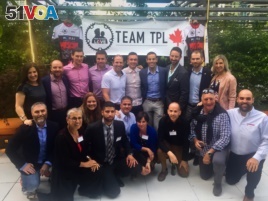 Canadian team True Patriot Love poses for a portrait with their support team. Four of the cyclists' fathers are part of their Race Across America support team. The team consists of the eight men in the back row. From left to right: Michael Breech, Laurence Boma-Fisher, Bryan Murphy, Brady Jones, Luke Billington, Reid McGregor, Marcus Dagenais and Chris Slawson. "I think our group of riders kind of thrives on the challenge," Slawson said. "Because ultimately that's what we signed up for."

This is Slawson's first Race Across America. Slawson said that the eight-person team would split into two groups of four. Because only one person can ride at a time, the group would rotate cyclists every 20 minutes for 10 hours, as the others rest.

Arvid Loewen said one of the things he likes about the race is that, "almost every rider has a cause that they are riding for. And I think that's just fantastic."

Olivia Liu reported this story for VOA Learning English. Hai Do was the editor.

charitable –adj. giving to causes for a social good

orphans –n. children who have lost their parents

diagnose –v. to find out what the cause of something is, such as a disease

webcam –n. a device that permits people to use video to talk to one another over the internet

We want to hear from you. Write to us in the Comments section, and visit 51VOA.COM