Cyprus’ Cheese Gets Protection from the European Union

Update Required To play the media you will need to either update your browser to a recent version or update your Flash plugin.
By Dan Novak
10 April 2021


The Mediterranean island of Cyprus is now the only country that can sell its famous halloumi cheese in the European Union.

Halloumi is a cheese made from goat, sheep and cow's milk. It is salty, feels like rubber and is usually cooked: fried or grilled.

Halloumi is very popular in Europe and around the world. Yearly cheese exports are worth at least $267 million. Farmers call the cheese "white gold." 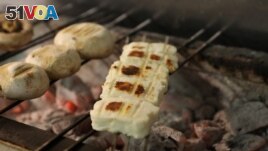 Grilled halloumi is seen in a restaurant in Nicosia, Cyprus, April 2, 2021. (REUTERS/Yiannis Kourtoglou)

Because of this popularity, foreign cheese makers have tried to sell their own cheese using the halloumi name. Cypriots argue that foreign producers' halloumi is inauthentic.

But later this month, the European Union is recognizing halloumi with its Protected Destination of Origin (PDO). This means only Cypriot producers will be able to market the cheese in Europe under the halloumi name. Cyprus is involved in 80 court cases against foreign producers who call their cheese "halloumi."

George Petrou oversees Petrou Bros. Dairy Products. The company makes about 25 percent of Cyprus' halloumi exports. He says the cheese is a Cypriot invention that dates back to 1500.

"Unfortunately in recent years many countries tried to copy us," he said. Using the halloumi name for other kinds of cheese "misleads consumers," he added.

Starting in 2024, at least half of the cheese will need to be goat and sheep's milk. The rest can be cow's milk.

The EU registration permits the northern part of Cyprus to export its halloumi, or "hellim" in Turkish, to Europe. Northern Cyprus is ethnically Turkish and has had a separate government since 1974. Turkey is the only country in the world to recognize Northern Cyprus. Before the PDO, Northern Cypriot producers could only export hellim to Turkey.

Cyprus President Nicos Anastasiades praised the agreement as "historic." He said the agreement gives the country an economic boost that will help both Greek Cypriots and Turkish Cypriots.

He added, "It's a strong message...that I'm sending to Turkish Cypriots about all the benefits we can reap from the protections that the European Union can offer."

inauthentic- adj. - not real, accurate, or sincere : not authentic

origin- n. the point or place where something begins or is created

mislead- n. to cause (someone) to believe something that is not true

consumer- n. a person who buys goods and services

boost v. to increase the force, power, or amount of (something)

benefit- n. - a good or helpful result or effect

reap- v. to get (something, such as a reward) as a result of something that you have done