Update Required To play the media you will need to either update your browser to a recent version or update your Flash plugin.
By John Russell
03 July 2022


Czechs have long gathered at village pubs - buildings or rooms where alcoholic drinks and often food are served. These pubs serve as a place to talk with friends or celebrate special events.

But in this country that is famous for its beer culture, increasing costs and less spending have left many pubs fighting for survival.

U Kryslu is a pub in the village of Sec in the Czech Republic. The business is suffering from a drop in sales as customers in the village of 318 people cut back on spending. This is the latest blow to pubs struggling to come back from restrictions tied to the COVID-19 pandemic. 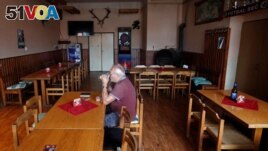 A customer drinks a beer inside the U Kryslu pub in the village of Sec near the town of Blovice, Czech Republic, June 28, 2022. (REUTERS/David W Cerny)

Sec Mayor Helena Chytra is seeking a new operator for U Kryslu. She recently warned, "In many villages and maybe even in ours the pub will cease to exist."

She added, "Five or 10 years ago at weekends the pub was full. There was no place to sit on a Friday or Saturday night."

Although Czechs drink 129 liters of beer per capita yearly, they have increasingly turned to drinking at home.

Plzensky Prazdroj, which makes Pilsner Urquell, a famous Czech beer, researched pubs in the country. It found that around 12 percent of pubs in Czech towns with fewer than 5,000 people have closed down in the past three years. That number is almost double the rate of bigger cities. Fast-rising costs may cause more pubs to close, market experts say.

"The economics of one pub in one village does not often make sense," said Lubos Kastner, a restaurant owner and member of the Czech Gastronomic Institute. He added that rural pubs would take a bigger hit as the economy worsens.

Many small pub owners do not want to pass on price increases for fear of losing customers. However, Czech inflation hit a nearly 30-year high of 16 percent in May.

"In the autumn...the chokehold (for many small pubs) will begin," said Hanus Vala, owner of the Na Palube Steakhouse in Milevsko.

Some owners have turned to Plzensky Prazdroj, the maker of Pilsner Urquell, and its "Village" program. The program offers advice and financial aid for struggling local owners who worry about coronavirus lockdowns and economic problems.

Eva Vejvancicka is the owner of U Kantu pub in Myslovice. She said she bought it in 2019 to prevent its closure and has since received financing from Plzensky Prazdroj.

"The pub is important for people to meet. There isn't even a shop here. A pub has always been here," she told Reuters recently as a group of friends sat outside with beers.

Plzensky Prazdroj began its program with 80 pubs in 2017 and now helps nearly 900 - about 10 percent of Czech village pubs. The aid includes direct financial payments as well as advice on things like improving the menu and the appearance of the businesses.

Company spokeswoman Petra Kubova said the program targets businesses in villages of less than 5,000 people. In these villages, pubs are often one of the few places people can get together.

Kubova compared important places in a village to the legs of a stool – a kind of chair.

"Every village has a three-legged stool of church, soccer field and pub that helps support the community. Without one, a village is missing a leg of the stool."

Jason Hovet and Michael Kahn reported on this story for Reuters. John Russell adapted it for VOA Learning English.

customer -- n. someone who buys goods or services from a business

cease – v. to stop doing (something)

chokehold – n. a force or influence that stops something from growing or developing

menu – n. a list of things that you can choose from; a list of the foods that may be ordered at a restaurant