Update Required To play the media you will need to either update your browser to a recent version or update your Flash plugin.
By VOA
05 June, 2014

On June 6th, 1944, Allied forces began landing along the coast of Normandy, in France. The event is known as D-Day. It was the beginning of a campaign by the United States and its allies to end the German occupation of Europe. D-Day was a turning point in World War II.

By the end of 1943, the German military had suffered defeats and was weakened. But it was still powerful enough to control France, Belgium, and much of the rest of Western Europe.

The time had come for the United States and its Allies to liberate the continent. The Supreme Allied Commander, American General Dwight Eisenhower, used radio to speak to the troops preparing to land on Normandy.

"Soldiers, sailors and airmen of the Allied Expeditionary Force: you are about to embark upon the great crusade, toward which we have striven these many months. In company with our brave allies and brothers in arms on other fronts, you will bring about the destruction of the German war machine, the elimination of Nazi tyranny over the oppressed peoples of Europe, and security for ourselves in a free world."

The German leader Adolf Hitler had known an invasion was coming. But he did not know where the Allied force would strike. Most Germans expected the Allies would attack at Calais, in northern France. But they were wrong. General Eisenhower planned to attack Normandy, across the English Channel. 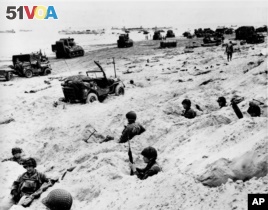 France D-Day Media
Eisenhower had 150,000 men and 12,000 airplanes for the attack. But most importantly, he had surprise on his side. Even after the invasion began, General Erwin Rommel and other German military leaders could not believe that the Allies had really attacked at Normandy. But attack they did. On the night of June 5th, tens of thousands of Allied soldiers parachuted behind German lines.

Then, Allied planes began dropping bombs on German defenses. And in the morning, thousands of ships approached the coastline, carrying men and supplies.

The battle quickly became fierce and bloody. American, British and other Allied forces moved on five beaches from their landing craft. The Germans had strong defenses. They were better-protected than the Allied troops on the open beaches. But the Allies had more troops.

On all but one of those areas, German resistance was lighter than expected. At Omaha Beach, two American divisions were slowed by the rising tide and heavy German gunfire. It was the fiercest and bloodiest battle of D-Day.

Slowly, the Allied soldiers moved forward on one part of the Normandy coast, then another. The Allies continued to build up their forces in France. Within one week they had brought nearly 90,000 vehicles and 600,000 men into France. And they pushed forward.

A total of 3,000 American soldiers died on Omaha Beach alone 70 years ago. On the first day of the invasion, almost 10,000 Allied troops were killed or wounded.

The Battle of Normandy continued through August, as Allied troops fought the Germans through France. In less than four months, General Eisenhower and the Allied forces had regained almost all of France. More than 400,000 Allied and German troops were wounded, killed or missing in action.
Related Articles
go top