Update Required To play the media you will need to either update your browser to a recent version or update your Flash plugin.
By Bryan Lynn
18 January 2023


A huge 3D printer is working to create what is believed to be the first two-story home built with the technology in the United States.

The home is currently taking shape in Houston, Texas. The 3D printing machine working on the project weighs more than 12 tons.

The 3D printer is using concrete to produce the home, which will be about 371 square meters. Some parts of the home will also have wood elements. Leaders of the project said the process is expected to take about 330 hours of printing. 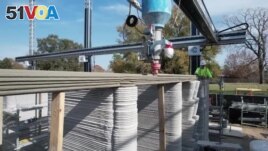 An enormous printer weighing more than 12 tons is creates what is believed to be the first 3D-printed, two-story home in the United States, January 12, 2023. (Reuters from video)

Leslie Lok is the architect who designed the three-bedroom home and who leads the design studio HANNAH.

Lok told Reuters news agency that in the design process, the team had to think about more than the design of the house and how it would be used. "We also design the actual print path, like how the printer will print, where it starts and where it stops," Lok said.

The project is a two-year cooperative effort by HANNAH, building company PERI 3D and CIVE, which provided engineering support.

Lok said since the printer does most of the work, fewer workers are needed at the building site. She said the effort only requires four to five people to oversee the 3D printing process.

Lok said: "One of the benefits is also, it takes a lot of the heavy lifting, the labor" from human workers.

Concrete is a very strong material to use in home building and can survive hurricanes, heavy storms and other severe weather.

Roberto Montemayor is the project leader for PERI 3D Construction. He told Reuters the large 3D printer operates in much the same way as the small printers used in homes and offices. But there are two main differences.

The first is that the home-building 3D printer can be expanded and changed to fit the needs of any size project, Montemayor said. The other difference is the material it uses. "We are printing here with concrete, which is a completely different material than plastic."

The home is expected to be completed in the second half of 2023. The builders say they hope the modern method can be used in the future to build even larger housing structures. They said the technology can also build homes faster and for a lot less money.

A growing number of American companies have begun offering homes built with 3D printing technology in recent years. But so far, the homes being offered are much smaller.

The startup company Icon, based in Austin, Texas, made news in 2018 by completing the first permitted 3D printed home in the U.S. At the time, it said the home had been built in just one day.

story –n. a level or floor of a building