Update Required To play the media you will need to either update your browser to a recent version or update your Flash plugin.
By Dan Friedell
17 June, 2016

Sunday, June 19, is Father's Day in the United States.

It is a day where children honor fathers for all of the sacrifices they have made.

Father's Day was first celebrated in the U.S. in about 1910. Sonora Louise Smart Dodd of Washington state got the idea for the event. 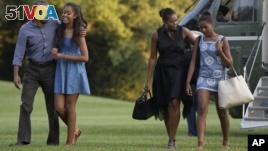 President Barack Obama may be the most famous father in the U.S. on this Father's Day weekend.

She was listening to a speech about Mother's Day and decided that fathers should be recognized, too. Her father raised six children by himself.

Father's Day did not catch on with the general public right away because many people thought it was just another chance for stores to sell gifts. It was not until 1972 that Father's Day became a national holiday in the U.S.

This Sunday is a time to thank fathers for doing nice things throughout the year. Maybe your dad gave you a gift, or helped pay for your education. Maybe he picked you up at school or took you on trips around the country.

Many American families celebrate Father's Day by gathering for dinner or organizing a family event.

Some children give presents to their fathers. The magazine Men's Journal suggests that you give dad a nice briefcase, a tool like a hammer or bottle opener, or perhaps a book with directions on how to prepare tasty meals on a barbecue grill.

But the holiday is not that serious. So some people decided to have fun on Twitter in honor of Father's Day. On Friday, the hashtag #PutYourDadInABand started trending.

The aim was to use Father's Day as the inspiration to change a band's name.

One person took the band Mumford and Sons and changed the name into "Mumford and I'm Disappointed in You, Son."

Another person must have remembered what his father used to say to him and a sibling, going with the expression "U2 Better Behave."

Do you have any suggestions for dad-related band names? We want to know. Write to us in the Comments Section or on 51VOA.COM.

band – n. a usually small group of musicians who play popular music together

pick up – v. the act of going somewhere to get a person or thing that you will then take to another place

briefcase – n. a small case or box that is used for carrying books or papers

barbecue grill – adj. a metal structure that is used to cook food over hot coals or an open fire