Dartmouth to Admit International Students Without Considering Ability to Pay

Update Required To play the media you will need to either update your browser to a recent version or update your Flash plugin.
By Dan Friedell
22 January 2022

Need-blind means a university offers admission to students without considering their ability to pay.

With the move, Dartmouth, which is the smallest of the famous Ivy League schools, joins other universities including Harvard, Princeton, and Yale. The Massachusetts Institute of Technology (MIT) and Amherst, also in Massachusetts, are other examples. 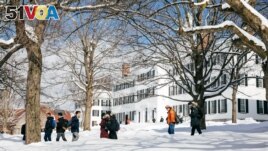 A number of U.S. colleges offer need-blind admissions but only six offer it to international students.

Syed Rakin Ahmed is a 2018 Dartmouth graduate from Bangladesh. He is working on an advanced science degree in Boston and plans to return to Dartmouth to finish medical school.

Rakin received financial aid to go to Dartmouth. He noted the high cost of higher education in the U.S. "does present a significant challenge for any international student, and even more specifically for international students from low-income countries, such as myself."

He said he expects the school to receive more interest from international students because of the change.

The current cost of attending Dartmouth is about $75,000 per year.

The policy will take effect immediately. That means students currently applying to Dartmouth may go for free if they can show their family cannot pay.

"Having a need-blind policy opens up that international realm for Dartmouth," Chu said.

She added that the decision may help Dartmouth admit international students who would otherwise go to school in a large city like New York, Chicago, or Los Angeles. She offered these thoughts on how Dartmouth's officials might think of their new policy.

"We're not in New York City, we're not a Columbia, we're not in Washington, D.C., we're not a Georgetown. People may not immediately think of us. They know we're an Ivy League school but we're not in Chicago or Los Angeles, these metropolises. How can we still draw really talented and excellent students? And I think financial aid is a wonderful way..."

Dartmouth's top official for admissions and financial aid said the school's move will influence the world for many years.

Lee Coffin said: "The students enrolling today will have lives and careers that stretch into the 2070s and beyond...We're announcing to the world...that international citizens are full and equal members of our applicant pool and ultimately our student body."

Students who have applied to attend a school are often described as the applicant pool by admissions officials.

Rakin, the future medical student, gave an example why it is valuable for Dartmouth to have students from many countries and different economic levels. One of his future goals, he said, is to help prevent women in his home country from getting cervical cancer. This form of cancer is limited in the U.S. because many young women get a vaccine.

But, the vaccine is not widely available in Bangladesh. He said the medical community is not invested in caring for women in the same way that it is in the U.S. He was able to share this information with his American classmates during public health discussions at Dartmouth.

Chu noted that the COVID-19 pandemic has made it harder for international students to come to the U.S. Rakin agreed, noting that government offices that process visas for students reduced their hours. Also, he said he knew students from Bangladesh who chose to apply to universities in Canada and Australia because of the political environment in America.

Chu and Rakin said the move by Dartmouth shows that it is worth the extra effort to come to the U.S. Rakin called the move toward need-blind admissions for international students "a refreshing change for the better."

Chu said other universities may want to, but change comes slowly in higher education.

"Universities are big, they're bureaucratic. It just takes time to change and consider these factors. Now Dartmouth has been added to this very short list of schools, to me, that's a positive thing."

If you are thinking about applying to university in the U.S. which schools would you like to see become ‘need-blind' for international students? Write to us in the Comments Section and visit 51VOA.COM.

graduate – n. a person who has received a degree showing they have finished studies at a school, college or university

challenge –n. an issue or problem that is difficult to deal with or solve

realm – n. an area of activity, interest or knowledge

talented – adj. having a special ability to do something well

enroll –v. to enter something, such as a school, as a member or student

option –n. something that can be chosen; a choice or possibility

bureaucratic – adj. using or connected with many complicated rules and ways of doing things; relating to a bureaucracy

factor – n. something that helps produce a result