Update Required To play the media you will need to either update your browser to a recent version or update your Flash plugin.
By VOA
14 November, 2014


David Bowie is a British singer/songwriter who remains one of the recognizable singers in the world of pop/rock music.

Beginning in the late 1960s and continuing through the 1980s, his music was edgy and experimental.

Many of Bowie's albums and concerts featured strangely dressed characters, like Ziggy Stardust and The Thin White Duke. These characters allowed him to experiment and to create unusual music for that time.

Bowie's desire for experimentation led him to move to Berlin in the late 1970s. He lived there for three years and became involved in the experimental art scene. 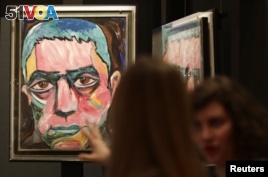 A painting by David Bowie is featured in an exhibit of his artwork in Berlin, Germany. May 2014 (REUTERS/Tobias Schwarz)

On June 7, 1987, David Bowie returned to then-West Berlin to perform a concert close to the Berlin Wall.

Bowie then sang the song Heroes, a song he had written in the capital. The song Heroes is about the Cold War and about the divided city of Berlin. Crowds on the other side of the Berlin Wall in East Germany cheered.

(Here is a portion of the lyrics refering to the Berlin Wall.)