March 8 Marks 'A Day Without a Woman'

Update Required To play the media you will need to either update your browser to a recent version or update your Flash plugin.
By VOA
07 March, 2017

In the United States, some people will be marking the day by protesting. Wednesday is being called "A Day Without a Woman."

Organizers of the Women's March on Washington proposed the demonstration in the United States. Like that march in January, organizers say the protest is in reaction to President Donald Trump's position on women's issues and comments he has made about women.

But unlike the women's march, Wednesday's protest centers on the absence of women. 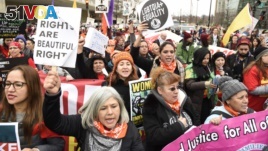 Participants attend the Women's March on Washington on Jan. 21, 2017 in Washington.

Organizers are calling for women to take the day off work and are urging them not to spend money Wednesday. They say "A Day Without a Woman" is a way to bring attention to, in their words, "the enormous value that women of all backgrounds add to our socio-economic system -- while receiving lower wages and experiencing greater inequalities."

Organizers also are asking supporters to wear the color red to show love and sacrifice.

As they did with the women's march, the organizers for the "A Day Without a Woman" strike have largely used social media to gain support and spread the word.

But, some people on social media have been sharply critical of the protest. They say that, because many women cannot afford to take a day off work, the protest only includes those at a higher economic level.

A writer for the Los Angeles Times describes Wednesday's protest as "A Day Without a Privileged Woman." "Privileged" means having special rights or conditions that most other people do not have.

The organizers, however, have said that women who can protest will strike for those who cannot.

"Many women in our most vulnerable communities will not have the ability to join the strike, due to economic insecurity," organizers said on their website. "We strike for them."

Women in more than 50 countries around the world will also protest on March 8. The movement is part of the International Women's Strike. They will be protesting violence against women and demanding equal rights.

background - n. the experiences, knowledge, education, etc., in a person's past

privileged- adj. having special rights or advantages that most people do not have