Update Required To play the media you will need to either update your browser to a recent version or update your Flash plugin.
By John Russell
18 November, 2017


A new study suggests that the timing of a wound affects the speed at which it heals.

Wounds suffered during the day heal around 60 percent faster than those sustained at night.

The study showed how the body's circadian rhythm controlled the healing of wounds. The circadian rhythm is like a clock or timer. It tells our bodies when to wake up, eat and sleep in a cycle -- a series of activities that repeat themselves day after day. Each cycle lasts about 24 hours. 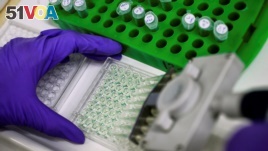 FILE - A scientist prepares protein samples for analysis in a lab at the Institute of Cancer Research in Sutton, Britain July 15, 2013.

In the study, researchers found that skin cells moved faster to repair wounds sustained during the day. Their findings were published in the journal Science Translational Medicine.

The researchers examined cells, mice, and burn injury databases. Specifically, their investigation found the following information: Night-time burns - burns suffered between 8 o'clock at night and 8 o'clock the next morning - were 95 percent healed after an average of 28 days.

But after an average of 17 days, daytime burns - burns sustained between 8 o'clock in the morning and 8 at night – were 95 percent healed.

In other words, nighttime injuries took an average of 11 days longer to heal.

The scientists say that circadian clocks play an important part in healing. Circadian clocks control many cells in the body and affect many biological processes, including sleeping.

John O'Neill was a co-leader of the study. "This is the first time that the circadian clock within individual cells has been shown to determine how effectively they respond to injuries," he said.

O'Neill added "We consistently see about a two-fold difference in wound healing speed between the body clock's day and night. It may be that our bodies have evolved to heal fastest during the day when injuries are more likely to occur."

Wounds are very costly to treat. Worldwide, billions of dollars are spent every year on wound-treatment services. In Britain's National Health Services, for example, such services cost around $6.56 billion per year. Experts says the high costs result, in part, from a lack of drugs that speed up the closure of wounds.

The findings, if confirmed by other studies, could have important implications for surgical operations and wound-healing medicines.

John Blaikley works at Britain's University of Manchester. He said the new study's findings could help scientists develop better drugs. The findings, he added, could also help doctors understand the best time of day to do a surgery or give medicine.

Kate Kelland reported on this story for the Reuters news agency. John Russell adapted her report for VOA Learning English. George Grow was the editor.

sustain – v. to deal with or experience (something bad or unpleasant)

o'clock – adj. used for showing position of an hour hand on a clock or timer

two-fold – adj. twice as much or as many

surgical – adj. of or relating to the process of performing a medical operation