Update Required To play the media you will need to either update your browser to a recent version or update your Flash plugin.
By Dan Novak
22 June 2022

It was the deadliest quake in Afghanistan for 20 years. In March 2002, a total of 1,100 were killed after the earthquakes in the Hindu Kush area.

Wednesday's disaster is a major test for the Taliban-led government. The group seized power last year after the U.S. and NATO allies pulled out of the country. 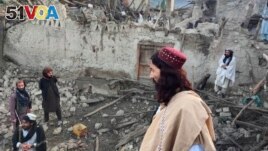 In this photo released by a state-run news agency Bakhtar, Afghans look at destruction caused by an earthquake in the province of Paktika, eastern Afghanistan, Wednesday, June 22, 2022. (Bakhtar News Agency via AP)

Rescuers arrived at the area by helicopter. But the rescue operation is likely to be difficult without international assistance.

The Taliban's supreme leader Haibatullah Akhundzadah rarely appears in public. On Wednesday, he called for "the international community and all humanitarian organizations to help the Afghan people affected by this great tragedy and to spare no effort to help the affected people."

Neighboring Pakistan's Meteorological Department said the quake's center was in Afghanistan's Paktika area. That is about 50 kilometers southwest of the city of Khost. Buildings were damaged in Khost and tremors were felt about 375 kilometers away in the Pakistani capital of Islamabad.

There is still little information on Wednesday's 6.1 magnitude quake. But quakes of that strength can cause serious damage in an area where homes and other buildings are poorly made. There are also landslides in the area.

Images from Paktika showed men carrying people in blankets to helicopters. Others were treated on the ground. Some images showed people looking through bricks and stones from destroyed houses, many of which had collapsed roofs or walls.

Robert Saunders is a scientist with the U.S. Geological Survey. He said an earthquake of that size would not create so much destruction in most places in the world. But a quake's damage often depends on geography, building quality and population density.

"Because of the mountainous area, there are rockslides and landslides that we won't know about until later reporting. Older buildings are likely to crumble and fail," Saunders said.

In Kabul, Prime Minister Mohammad Hassan Akhund organized an emergency meeting to plan a recovery effort. And a Taliban official added, "When such a big incident happens in any country, there is a need for help from other countries."

A U.N. official in Afghanistan said that help is on its way but that may be difficult. Many international aid groups had left the country following the U.S. exit because of concerns about security and the Taliban's poor human rights record.

The Italian medical aid group Emergency still operates in Afghanistan. The organization said it sent seven ambulances and workers to the areas closest to the earthquake. And Prime Minister Shahbaz Sharif of neighboring Pakistan said his nation would provide help.

Dan Novak adapted this story for VOA Learning English based on reporting from The Associated Press and Reuters.

spare — v. to not do or provide

tremor— n. a shaking movement of the ground before or after an earthquake

magnitude — n. the size, extent, or importance of something

density — n. the quality of having parts that are close together

ambulance — n. a vehicle used for taking hurt or sick people to the hospital especially in emergencies