Update Required To play the media you will need to either update your browser to a recent version or update your Flash plugin.
By VOA
10 August, 2015

The Taliban is taking responsibility for a suicide car bombing in the Afghan capital, Kabul. The attack took place Monday at the main entrance to the international airport. At least four civilians were killed. Seventeen other people were injured.

Witnesses said the target of the attack was a group of vehicles carrying government officials. The Taliban said the attack targeted "foreign occupation forces."

The Taliban has claimed responsibility for other bombings in recent days in Kabul and in other places in the country. More than 50 people were killed last Friday in an attack on an American base near the airport and on an Afghan police training center. On Saturday, at least 29 people were killed in a Taliban suicide bombing in the northern province of Kunduz.

Several people were killed in Turkey Monday after a series of attacks on police officers and soldiers. A bomb exploded at a police station in Istanbul. The explosion wounded at least 10 people, including three police officers. 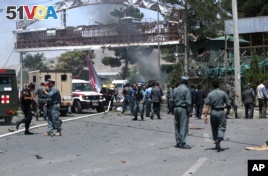 Turkey's state-operated news agency reported that Istanbul police are blaming the attack on "terrorists." Later at the police station, officers exchanged gunfire with two attackers and killed them.

Also on Monday, a bomb exploded along a road in southern Turkey. Four police officers were killed.

In a separate incident, two gunmen shot at an American diplomatic office in Istanbul. Police fired back at them. No one was injured. The attackers fled, but police say they detained one of them, a woman.

Officials say she is a member of the Revolutionary People's Liberation Party-Front. Turkey, the United States and the European Union consider the group a terrorist organization. Its supporters have carried out several attacks, including a suicide bombing two years ago at the U.S. embassy in Ankara.

Police in Ferguson, Missouri say a man is hospitalized and in critical condition after being shot by police in an exchange of gunfire.

The shooting took place on what had been a day of peaceful demonstrations in Ferguson. The protesters were marking the one-year anniversary of the shooting death of an unarmed black teenager by a white police officer.

St. Louis County police said four officers had been watching a man who they thought might be carrying a gun. Police said the man was involved in an exchange of 40 or 50 gunshots between two groups of people before shooting the officers' vehicle many times. The four officers exchanged shots with the man.

Mr. Harris' father reportedly said his son was a friend of 18-year-old Michael Brown, who was killed by police in Ferguson last year.

A lawyer for an American reporter Jason Rezaian says a court in Iran could announce its decision in his spying trial within a week. A court in Tehran held a final secret hearing on Monday in the case of the reporter, who works for The Washington Post.

The newspaper, American officials and press freedom groups have all repeatedly criticized the jailing and trial of Mr. Rezaian. They say he is not a spy. He is charged with working with what Iran says are "hostile governments."

A group that says it is linked to al-Qaida is claiming responsibility for killing a blogger in Bangladesh.

Six men used large knives to attack and kill 40-year-old Niloy Chakrabarti at his home on Friday. It was the fourth killing of a secular writer in Bangladesh since the beginning of this year.

Mr. Chakrabarti wrote often on websites about his belief that God does not exist. He also criticized people with strong religious beliefs.

Hours after he was killed, reporters received a claim of responsibility from a group calling itself the Bangladesh part of al-Qaida in the Indian Subcontinent. The message said the group had carried out the attack.

Mr. Chakrabarti told police in May that he was worried he would be killed. He later said on Facebook that police did not seem to believe he was in danger.

One blogger told VOA that Bangladeshi police are telling bloggers to leave the country for their own safety.