Up to 32 people were killed in two bomb attacks Monday in the Syrian city of Homs, near the border with Lebanon.

The second attack killed people who gathered to see the damage of an earlier car bomb. A suicide bomber entered the crowd and exploded a bomb hidden in clothing.

The attacks took place in the al-Zahraa district, in the central part of the city. State-controlled media say 19 people were killed in the two bombings. The Syrian Observatory for Human Rights says 32 people were killed. Many others were hurt. 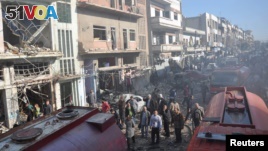 Syrian army soldiers and civilians inspect the site of two bombings in the Syrian city of Homs, in this photo provided by the state-owned Syrian Arab News Agency (SANA), Dec. 28, 2015.

It was the second major attack in Homs since the government and rebel forces reached a cease-fire agreement this month. The government will take back areas of the city controlled by rebels.

Separately, rebels and others began leaving three Syrian towns this week under a humanitarian agreement reached in September. The agreement between the government of President Bashar al-Assad and the rebels who oppose him is supported by the United Nations.

On Monday, more than 120 rebels, and others who are hurt, began leaving the town of Zabadani. It is the last area rebels control in Syria near the border with Lebanon. The Syrian Observatory said they were being moved to areas in Syria controlled by opponents of the government.

Also on Monday, a group of 335 people, including civilians, moved from two government-controlled villages in northwestern Syria to other government-held areas.

On December 18, all members of the U.N. Security Council voted to approve a plan for peace in Syria. It was a rare unanimous vote.

U.S. Secretary of State John Kerry and others have said ending the civil war in Syria is the most important step in defeating the Islamic State group and bringing stability to the area.

More than 250,000 people have died in the Syrian conflict since it began in 2011. More than 4 million people have fled the country.

VOANews.com reported this story. We also used reporting from The Wall Street Journal, Al Jazeera and Reuters. Christopher Jones-Cruise adapted it for VOA Learning English. Kathleen Struck was the editor.

unanimous – adj. agreed to by everyone