Update Required To play the media you will need to either update your browser to a recent version or update your Flash plugin.
By Jonathan Evans
03 July, 2016


Bombings in Baghdad early Sunday killed at least 124 people and wounded at least 180 others.

A suicide truck bombing happened shortly after midnight at a busy shopping area in the Karrada district. At least 119 people died and 170 were wounded. It was the deadliest attack in the Iraqi capital this year.

The Islamic State terrorist group claimed responsibility for the attack. It said it had targeted Shi'ite Muslims, which it considers heretics. 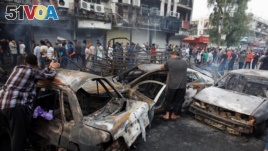 People look at cars damaged by a suicide truck attack in the Karrada shopping area of Baghdad, Iraq, July 3, 2016.

The bombing happened after sundown, when many people were in the streets after a day of fasting. Many Muslims go to shopping areas before the holiday marking the end of the Muslim holy month of Ramadan.

A second attack took place in the northern Shaab area of Baghdad. At least five people were killed and 16 were wounded when a bomb exploded. No one has claimed responsibility for the attack.

Iraqi Prime Minister Haider al-Abadi visited the site of the bombing hours after the attack.

The attacks on Sunday took place about a week after Iraqi forces forced Islamic State militants out of Fallujah, which is 50 kilometers west of Baghdad.

heretic – n. someone who believes or teaches something that goes against accepted or official beliefs