Update Required To play the media you will need to either update your browser to a recent version or update your Flash plugin.
By Bryan Lynn
13 December 2021


A series of powerful tornadoes tore through six American states over the weekend, killing at least 90 people. Tornadoes are destructive storms in which powerful winds move around a central point.

One of the tornadoes moved through Mayfield, a small town in Kentucky. The storm caused widespread destruction there and killed at least eight people. 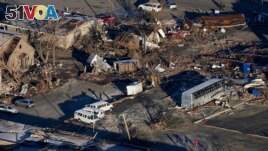 In a view from this aerial photo, people walk amidst destruction from a recent tornado in downtown Mayfield, Ky., Sunday, Dec. 12, 2021. (AP Photo/Gerald Herbert)

The eight people confirmed dead in Mayfield worked in a candle factory that was destroyed in the storm. Eight more workers at the factory remain missing.

Kentucky Governor Andy Beshear had earlier feared up to 100 people may have been killed in his state. But on Sunday he reduced that estimate down to as low as 50.

Mayfield is a town of about 10,000 people. Judy Burton is a Mayfield local who spoke to The Associated Press about the storm. She said she was able to take shelter in the basement of her apartment building with her dog and other people before the tornado hit. When observing the damage later, she could not believe the storm's destructive path.

As she looked up at what used to be her third-floor apartment, Burton could still see her clothes hanging, but the walls were gone. Across the street, a damaged church was closed up. A restaurant where neighbors often gathered for lunch was lost in the destruction.

"It's gone. It's terrible, just terrible, I'm shaking," Burton told the AP. "It's going to take me awhile to settle my nerves."

Burton cannot imagine a single family in town not mourning after the disaster. She says Mayfield is the kind of place where everyone is somehow connected to everyone else.

In Mayfield, hundreds of buildings and homes were reduced to nothing. Many structures that were still standing had their roofs torn off. Streets were filled with clothes, fallen trees and material from buildings. Local officials said the fire station was inoperable and most of the town's police cars were destroyed.

Burton said she worries about her neighbor and her dog. They are feared among the dead, as they were probably unable to escape as walls collapsed around them.

Shelters were set up in the area, with donations and volunteers coming in from several surrounding communities. At the shelters, people could get food, water and clothes.

Meagan Ralph is a teacher who volunteered to oversee operations at a shelter. She told the AP that hundreds of her neighbors were left with nothing. But, she added: "We will recover, absolutely. We're small but mighty."

Kentucky was the hardest-hit state. In Illinois, six workers were killed at an Amazon goods storage center after the building collapsed.

A nursing home was hit in Arkansas, causing one of that state's two deaths. Four people were reported dead in Tennessee, while officials in Missouri said two people died.

candle – n. a long piece of wax with a string going through it that is lit to produce light

basement – n. the area in a house that is below ground

apartment – n. a set of rooms for someone to live in on levels of a building or house

church – n. a building where Christians go to worship God

roof – n. the surface that covers the top of a building or vehicle