A powerful ocean storm has caused many deaths and severe damage after hitting the Philippines, Hong Kong and Mainland China.

Officials in the mining town of Itogon said a landslide there buried at least 40 miners and their families. Rescuers continued searching for survivors on Monday. But Mayor Victorio Palangdan said there was a "99 percent" chance that all of the missing were killed. 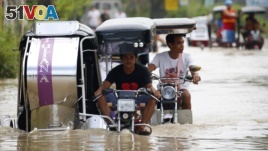 People travel through a flooded road brought about by Typhoon Mangkhut, which hit the northern Philippines on Saturday. (AP Photo/Bullit Marquez)

Officials say Typhoon Mangkhut hit the Philippines with winds of at least 205 kilometers an hour. About 150,000 people were in temporary shelters when the storm hit.

The storm affected an estimated five million people across the Philippines. Severe flooding has been reported in nine provinces. Reuters reports that the government said the storm destroyed rice and corn crops worth an estimated $177 million. At least 450 homes were damaged.

Philippine officials said the Itogon landslide was near a gold mine operating illegally in the area. Such mines can weaken hillsides, increasing the chance of landslides, they said.

On Sunday, Mangkhut moved northwest to China, where it brought heavy rain and strong winds to several southern provinces. The storm caused some delays in rail, airplane and boat transportation along parts of China's southern coast.

In Hong Kong, workers cleared fallen trees and other storm damage. The Hong Kong Observatory said Mangkhut was the most powerful storm to hit the city since 1979.

The typhoon has weakened to a tropical storm. However, officials warned the storm conditions are expected to continue through Tuesday.

Bryan Lynn wrote this story for VOA Learning English. His story was based on reports from the Associated Press, Reuters and Agence France-Presse. Mario Ritter was the editor.