Update Required To play the media you will need to either update your browser to a recent version or update your Flash plugin.
By Christopher Jones-Cruise
14 February, 2016

Republicans campaigning for the party's presidential nomination said President Barack Obama -- a Democrat -- should not try to replace Scalia before he leaves office in January. They said he is too close to the end of his presidency.

But Democrats said it is the duty of the president to name new justices no matter how soon his or her presidency is to end. 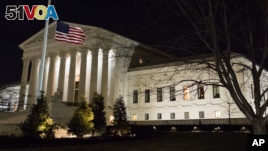 A U.S. flag flies at half-staff in front of the U.S. Supreme Court in Washington, Feb. 13, 2016, after it was announced that Supreme Court Justice Antonin Scalia, 79, had died. (AP Photo/J. David Ake)

Justices serve on the Supreme Court until they leave voluntarily or die. Some of them serve for many years after the president who named them leaves office.

Obama said Saturday that he would seek Senate approval for a new justice before he leaves office. "I plan to fulfill my constitutional responsibilities to nominate a successor in due time," he said.

The president also called on the Senate "to give that person a fair hearing and a timely vote. These are responsibilities that I take seriously, as should everyone. They're bigger than any one party -- they're about a democracy."

Republican Mitch McConnell is the Senate Majority Leader. He said the president should not nominate a new justice. The U.S. Constitution gives the Senate the power to approve a presidential nominee for the Supreme Court.

Some political experts have said if the president were a Republican with little time left in office, Democrats would be calling for him or her not to name a new justice. And they would be calling on the Senate not to vote on the nominee. In other words, the experts believe that a politician's positions change depending on whether they believe it is good for their political party.

If the Senate does not confirm a new justice before Obama leaves office, the seat will be empty for almost a year. It is unusual for a seat on the court to be empty for so long. In the past 100 years, ten justices have died while they were on the court. They were replaced within about three months on average.

Many important cases on the court are decided by a vote of 5 to 4. Scalia was often on the winning side of cases that conservatives supported. But now, without his vote, conservatives cannot win many of their cases because there are four liberals on the court.

A Supreme Court that has eight members can still decide some cases, if more than four justices agree. Without a fifth vote, many important cases cannot be decided.

This year the court was to consider many difficult issues -- including abortion, immigration and religious freedom.

VOANews.com reported this story. Christopher Jones-Cruise adapted it for VOA Learning English. Hai Do was the editor.