Deaths of Indonesian Election Officials Lead to Talk of Changes

Update Required To play the media you will need to either update your browser to a recent version or update your Flash plugin.
By Jonathan Evans
07 May, 2019


You might have heard that more than 300 election workers died during Indonesia's recent presidential and legislative election. The deaths were blamed on conditions related to exhaustion -- the state of being tired, either mentally or physically.

One of those who died was Umar Madi, a 64-year-old election official in West Java. His job was to keep watch on the voting and count ballots.

His daughter Evi Erwiyati said that a stroke was listed as the official cause of death. But her father also suffered from heart conditions that, at the time, were under control. She noted, "My mother would bring him medications, but he didn't stop working. He was happy to do it."

Arief Priyo Susanto is an official with Indonesia's General Elections Commission, known as the KPU. He confirmed the number of deaths to VOA. He said, "Generally, [the cause] is exhaustion." More than 2,000 election workers also reportedly became sick. 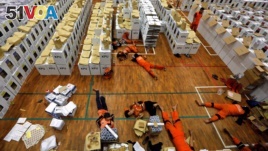 Workers lay during a break as they prepare election materials before their distribution to polling stations in a warehouse in Jakarta, Indonesia, April 15, 2019. (REUTERS/Willy Kurniawan)

News of the deaths came as a shock to many Indonesians. The April 17 vote was the first time Indonesia held both presidential and legislative elections at the same time. The first democratic presidential election took place in 2004.

Titi Anggraini is the executive director of the monitoring group Association for Elections and Democracy. She said the $35 that Umar Madi was paid for monitoring the elections and counting the ballots by hand is not enough. She added that having both presidential and legislative elections at the same time was partly responsible for the deaths of so many officials.

This year, the KPU lowered the minimum age for elections officials from 25 to 17. It also reduced the number of voters permitted in a single voting center. These rules were meant to reduce the workload for each election official.

Yet as Titi noted, "it made no difference, since there are also problems with insufficient ballots, and the number of political parties and representatives went up as well."

Arief of the KPU told VOA the most the government pays for relatives of the fallen officials is about $2,100. On April 23, the health ministry told hospitals and other health centers to give the greatest care to the sick officials.

Concerns over holding the presidential and legislative elections on the same day have led to talk of changes in future votes.

Ace Hasan Syadzily is a spokesman for Joko Widodo's election campaign team. He said "We have to evaluate the simultaneous elections, especially with regards to the execution."

Speaking to reporters, he expressed sympathy for the election workers who died. He said, "I think {these officials} are a warrior of democracy."

The KPU will finish the vote counting process on May 22.

Stanley Widianto reported this story for VOA News. Jonathan Evans adapted it for Learning English. The editor was George Grow.

insufficient – adj. not having or providing enough of what is needed; not sufficient

minimum – n. the lowest number or amount that is possible or allowed

monitor(ing) – v. to watch, observe, listen to, or check something for a special purpose over a period of time