Debris May Be From MH370

Update Required To play the media you will need to either update your browser to a recent version or update your Flash plugin.
By Dan Friedell
06 March, 2016


A piece of metal from missing Malaysia Airways Flight 370 may have been found in Mozambique.

The metal is white and about one meter long. It is being sent to Australia for testing.

The Australian agency supervising the search for the plane will examine the metal to determine where it came from. 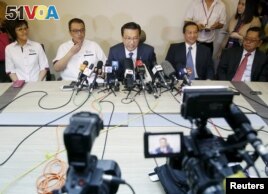 Malaysia's transport minister Liow Tiong Lai speaks at a news conference about debris found on a beach in Mozambique.

An American beachcomber found the piece of metal and brought it to authorities in Mozambique.

The piece of metal, or debris, may be from an airplane part called a horizontal stabilizer. It is printed with the words "no step" and has a code on it that makes experts think it is from a Boeing 777. That is the same kind of plane that disappeared in 2014 with 239 people on board.

Computer models predicted that debris could wash-up in Mozambique.

If the metal turns out to be from Flight 370, it will be the second confirmed piece of debris from the plane. A piece of the wing, called a flaperon, was found on a French island in the Indian Ocean last summer.

The man who found the debris is from the state of Washington. He travels around looking for pieces of the plane. He said he traveled to a number of countries looking for parts of Flight 370.

The transport minister in Malaysia did not want to get too excited about the discovery. He asked people to wait for more information.

He says there will be a search if the piece of metal turns out to be from the Malaysian plane.

On March 8, the Malaysian authorities will release more information about the new debris and the search. March 8 is the two-year anniversary of the plane's disappearance.

The plane was going to Beijing from Kuala Lumpur before it went off course over the Indian Ocean.

Steve Herman reported on this story for VOANews. Dan Friedell adapted it for Learning English. Kathleen Struck was the editor.

Do you think the debris in Africa is part of the missing plane? Write to us in the Comments Section or on 51VOA.COM.

stabilizer – n. the part of an airplane's tail that cannot be moved

beachcomber – n. a person who walks along beaches looking for things (such as seashells or items that can be sold)