Deciding by a ‘Flip of a Coin’

Update Required To play the media you will need to either update your browser to a recent version or update your Flash plugin.
By Anna Matteo
29 May 2021

On this program we talk about words and expressions from the English language. We also give examples on how to use them. 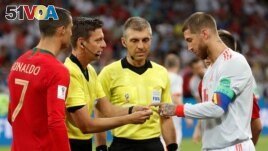 Today, we are going to talk about coins! Coins are small, flat and usually round pieces of metal issued by a government as money. In the United States we have coins for dollars, half dollars, quarters, dimes, five cents or nickels, and one cent or a penny.

There are two sides to a coin. For example, the U.S. quarter has an image of George Washington on one side and an eagle on the other side. So, naturally, we call the Washington side head and the other side tail.

Experts often consider mental health issues and homelessness to be two sides of the same coin.

In other words, there is often a connection or relationship between the two.

We flip or toss a coin and call heads or tails. "Heads you win." or "Tails I win." Whosever call matches the side of the coin showing is the winner. This is what we mean by winning a decision by a flip of a coin or a coin toss.

In many sports, deciding who gets the ball first or takes the field first is sometimes done by a coin toss.

There is a certain amount of luck involved in a flip of a coin. You have a 50/50 chance of winning. For some things, those odds may not be good enough.

When the stakes are very high, meaning when you could lose a lot, you might not want to flip a coin. For example, it would not be a good idea to bet double or nothing of your entire life's savings by flipping a coin. There is a 50/50 chance of your losing everything.

If the two choices are both good and nearly equal, a coin toss might be the perfect way to come to a decision. Let's say you and your best friend want to go out for dinner. She wants Italian. You want Korean. You both like the two restaurants. So, a coin toss is a perfect way to decide.

We also use this expression to describe a situation where two outcomes, usually opposites, are likely to happen. And they will be decided by chance, not by reason or scientific research. To some degree, the results are out of your hands.

It's out of your hands whether the rain will come today.

It's a coin toss whether the rain will come today.

Whether or not we will be back next week will not be decided by a flip of the coin. We will definitely have a new program for you. On that you can bet your bottom dollar!

Anna Matteo wrote this for VOA Learning English. Hai Do was the editor.

flip – v. to toss so as to cause to turn over in the air : flip – n. the act of flipping something : a quick turn, toss, or movement

toss – v. to throw with a quick, light, or careless motion or with a sudden jerk : toss – n. a deciding by chance and especially by flipping a coin

stakes – n. something (such as money) that you could win or lose in a game, contest, etc.

double or nothing – adv. with the result that a gambler either wins two times as much money as he or she has already won or loses all of the money

out of your hands – phrase not within one's control