Update Required To play the media you will need to either update your browser to a recent version or update your Flash plugin.
By Faith Pirlo
02 December 2022


This week on Ask a Teacher, we will answer a question about the words "reduce" and "decrease." 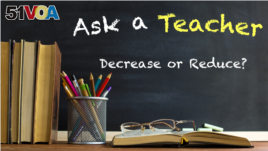 Ask a Teacher: Decrease or Reduce?

Would you please explain to me when to use "decrease" and "reduce?"

Thanks for giving us such valuable points.

Hello Mahmoud! Thank you for writing to us! The words "decrease" and "reduce" are often thought of as having the same meaning. However, there are some differences, especially in the uses of "reduce."

"Decrease" means to grow less in amount, size or strength over time, or to cause to be less.

Online shopping and big stores like Target have helped to decrease shopping malls in the US from 2,500 in the 1980s to around 700 malls now.

Voter turnout numbers decreased during the midterm election in some states like West Virginia and Virginia.

Decrease can also be a noun. It is the process of growing less over time. It is a countable noun. For example:

There has been a decrease in newspaper reading over many years, possibly because of the internet.

Now let's move on to "reduce."

"Reduce" is a verb and has many more meanings. It is most often used as a transitive verb that takes a direct object, but sometimes, we can use it without a direct object.

The general meaning is to make something smaller. This meaning is most closely related to "decrease."

Electric cars could reduce our need for gasoline-powered cars.

Reduce can also mean to bring together into one and to narrow down.

Every year, I reduce my clothes by going through my closet and giving away some pieces.

We can also reduce a liquid by boiling it. This makes the taste stronger and there is less liquid.

If you bring sugar to a boil and then reduce it, you are left with a thick caramel sauce.

Reduce can also mean to bring to a certain state or condition, usually a negative one. We can use "reduce" with the preposition "to" to create a phrasal verb.

The concert reduced her to tears.

This sentence is in the active voice. This means that the concert moved the woman emotionally to such an extent that she cried.

We can also use the passive voice to mean that someone is reduced to a state or condition.

She was reduced to uncontrollable laughter after seeing the funny movie.

The forest was reduced to ashes by the wildfire.

closet – n. a usually small room that is used for storing things (such as clothing, towels, or dishes)

caramel – n. a light brown candy made from butter, sugar, and milk or cream

sauce – n. a thick liquid that is eaten with or on food to add flavor to it

negative – adj. emphasizing the bad side of a person, situation, or thing

active voice – n. a way of writing of speaking that uses active verbs where the subject performs the action of the verb.

passive voice – n. a way of writing or speaking that uses passive verbs where the subject receives the action of a verb.