Update Required To play the media you will need to either update your browser to a recent version or update your Flash plugin.
By Bryan Lynn
04 July, 2018


New technology is making it possible for people to make realistic videos of people appearing to say things they never actually said.

The videos are known as "deepfakes."

The name comes from the process of deep learning, a form of artificial intelligence, or AI. They can be created with computer programs available for sale or on the internet. The technology uses face mapping and AI to produce false videos that look almost real.

Lawmakers, intelligence officials and media experts have expressed concern about deepfakes. They warn the false videos could be used to threaten America's national security or interfere in elections.

The videos are created by loading a complex set of instructions into a computer, along with lots of images and audio recordings. The computer program then learns how to copy the person's facial expressions, movements, voice and speaking patterns.

Technical experts say, with enough video and audio of a person, the system can produce fake video of the person saying anything. 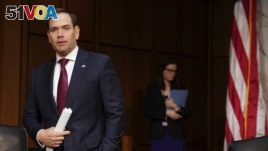 Florida Senator Marco Rubio is one of several U.S. lawmakers warning of the dangers of such technology. He says that, so far, deepfakes have mainly been used against famous people or to create humorous videos. But he says he can imagine foreign nations finding ways to use them to harm American democracy and society.

"It's a weapon that could be used - timed appropriately and placed appropriately - in the same way fake news is used," Rubio said. But in video form, such news could create distrust and chaos before an election or any other major U.S. decision, he added.

"We know there are people out there that are trying to divide society, influence elections, and we know this capacity exists. So it's only logical that at some point someone's going to take the next step and sort of weaponize it."

You see, I would never say these things, at least not in a public address. But, someone else would.

It was created using a combination of professional and free video editing programs using machine learning.

Hany Farid is a digital forensics expert at Dartmouth College in Hanover, New Hampshire. He agrees there is a great possibility that deepfakes will be used to try to influence America's politics. "I expect that here in the United States we will start to see this content in the upcoming midterms and national election, two years from now."

The problem, Farid says, is that it will be very easy for almost anybody to create a realistic-looking fake video of world leaders. "We have entered a new world where it is going to be difficult to know how to believe what we see," he told the Associated Press.

He added that the opposite result is also worrying. People will become so used to seeing false videos that they will be more likely to doubt a real video. Farid expects the problem to spread worldwide.

"It takes some real forensic capability, technical capabilities, to be able to show that it's not real. And by the time that's done, it's been widely disseminated."

Rubio and other lawmakers say people will need to take more responsibility to identify fakes.

Bryan Lynn wrote this story for VOA Learning English, based on reports from the Associated Press and other sources. was the editor.

appropriately – adv. suitable or right for a particular situation or person

chaos – n. a situation where there is no order at all and everyone is confused

forensics – n. scientific methods for examining objects or substances related to a crime

disseminate – v. to spread or give out news, information, ideas, etc. to many people