Update Required To play the media you will need to either update your browser to a recent version or update your Flash plugin.
By Susan Shand
27 July 2020


South Korea has reacted to North Korean claims that a man who fled the North was infected with the coronavirus when he returned to the country.

South Korean military officials said on Monday that border guards may not have seen the man before he apparently swam back to the North. Officials said guards found the man's belongings near a drainage ditch on the northeastern island of Ganghwa.

South Korean police had recently accused the 24-year-old of raping another defector, and media reports say police wanted to arrest him. The man had recently lost his job, the reports said. 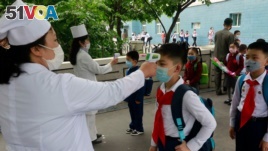 But South Korean health officials said the man was not listed as a COVID-19 patient or as someone who had come in contact with infected individuals.

On Sunday, North Korean state media said a "runaway" suspected of carrying the virus returned to the North on July 19th. It accused the man of "illegally crossing the demarcation line" that separates the two Koreas.

It was the first time North Korea has said the country may have a possible coronavirus infection. North Korea has declared a state of emergency and ordered people around Kaesong City to obey new public health measures. Kaesong City is the border town where the re-defector was found.

Why admit it now?

Although 16 million coronavirus infections have been reported worldwide, North Korea had long claimed it was completely free of the virus. Many experts say that claim was highly unlikely because of the nature of the virus.

North Korea shares a 1,400-kilometer-long border with China, where the virus was discovered. Although the North officially closed its borders in February, much of its trade with China is unofficial and difficult to control.

Many experts said North Korea may be using the re-defection as one way to admit it has cases of coronavirus, even while blaming South Korea.

"This would make for an extremely convenient way for the regime to admit the existence of COVID-19 in the country," wrote Benjamin Katzeff Silberstein. He is a North Korea specialist at the United States-based Foreign Policy Research Institute. He added that the message from North Korea is that its actions to avoid the coronavirus were perfect. Blaming the South removes any difficulties with China.

The move could also have a message for the North Korean people, says Go Myong-Hyun of the Seoul-based Asian Institute for Policy Studies. The message is: "there is a lot of infection going on outside of North Korea, and that the regime is trying...to keep the country clean and efficient," he said.

The defector's ability to return to North Korea raises concerns about security along the 250-kilometer border that separates North and South Korea.

When North Koreans flee their country, they usually do so along the border with China. The border between the two Koreas is one of the most heavily guarded in the world and, most believe, nearly impossible to cross illegally.

But somehow the defector at the center of North Korea's coronavirus appears to have crossed the inter-Korean border twice.

The defector, whose family name is Kim, detailed his 2017 escape from North Korea last month.

"I decided to escape because of poverty," he said in a video published on YouTube.

barbed wire – n. a wire fence with sharp points that holds people inside

estuary – n. the tidal mouth of a large river

runaway – n. someone who leaves home due to unhappiness

regime – n. a government, especially an authoritarian one