Update Required To play the media you will need to either update your browser to a recent version or update your Flash plugin.
By VOA
16 November, 2012

American lawmakers this week questioned David Petraeus about the attack on the American consulate in Benghazi, Libya. The retired general inspected the office earlier this year as head of the Central Intelligence Agency. The attack resulted in the deaths of Ambassador Christopher Stevens and three other Americans. Two were security officers working for the CIA.

On Friday, General Petraeus spoke to members of Congress as the former director of the agency. He resigned last week after admitting to a relationship with a woman other than his wife. The affair with Paula Broadwell was uncovered by the Federal Bureau of Investigation. The FBI was investigating threatening e-mails sent to a Florida woman, Jill Kelley. Officials found that Paula Broadwell sent the e-mails. Further research uncovered the relationship between her and General Petraeus. 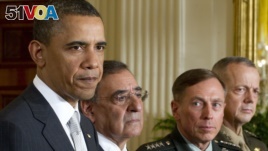 President Barack Obama, and from the left, Leon Panetta, General David Petraeus, and General John Allen in the White House in Washington, D.C., April 28, 2011
The general had resigned from the military before joining the CIA. It was during his leadership of the agency that the affair started. It ended a few months ago.

Paula Broadwell first met General Petraeus when he spoke at Harvard University in two thousand six. She decided to write a book about him as part of her studies.

"It was a very sad situation to have a distinguished career like that end in this manner and my heart obviously goes out to him and his family but I think he took the right step."

On Wednesday, President Obama said David Petraeus had what he called an "extraordinary career" and served the country with distinction. He also said he had not seen evidence that information harmful to national security was made public.

However, some officials say a computer used by Paula Broadwell was found to have classified information. She and General Petraeus both deny that he passed top secret information to her. Law enforcement officials are investigating how she used or handled the information. The CIA also announced it will investigate the Petraeus case.

The FBI also uncovered an unusual amount of communication between Jill Kelley and the head of NATO forces in Afghanistan, General John Allen. Its investigation found up to thirty thousand pages of messages between the two.

Jill Kelley is known for her high-level social ties to MacDill Air Force Base, which is the home of the American Central Command. Through her social events, she became friends with both General Petraeus and General Allen.

The Defense Department is investigating General Allen's ties to Ms. Kelley as a possible violation of military rules.

The general has denied any wrongdoing. He will remain as head of NATO forces in Afghanistan while the investigation continues. On Tuesday, President Obama delayed the general's nomination to be NATO's top commander in Europe until the investigation is complete.
Related Articles
go top