Update Required To play the media you will need to either update your browser to a recent version or update your Flash plugin.
By Bryan Lynn
17 July 2022


Satellite images suggest that deforestation in the Brazilian Amazon hit record levels in the first half of 2022.

The images were recorded between January and June. They show about 4,000 square kilometers of new destruction. That is more destruction than has been measured in any six-month period during the seven years Brazil has been keeping such records.

The information confirms that deforestation is continually happening during the rainy season. Deforestation is historically higher in the second half of the year – when it is drier and people can travel more easily in the Amazon. 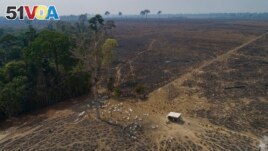 Around half of the activity happened on public lands, IPAM said. In Brazil, people often illegally seize public land with the expectation that the areas will become legal farmland in the future.

Other illegal property and timber deals – along with a lack of law enforcement – add to the increasing deforestation rates, said Ane Alencar, IPAM's science director.

"Those who control the Amazon don't want it preserved," Alencar told The Associated Press. "The standing forest has no value in today's Amazon."

Amazonas state lost the greatest number of trees to the recent cutting, the report said. Deforestation in Para and Mato Grosso states have historically registered more tree loss. Experts say that development is worrisome because Amazonas is deep in the rainforest and has remained mainly untouched compared to other Amazon areas.

timber – n. wood that is used for building

preserve – v. to keep something the same or prevent it from being damaged or destroyed