Deforestation Is a Threat to the Amazon

Update Required To play the media you will need to either update your browser to a recent version or update your Flash plugin.
By VOA
25 September, 2014


The country of Brazil is home to the world's largest rainforest – the Amazon. A rainforest is a kind of forest that receives at least 254 centimeters of rain each year. But the Brazilian government recently said the Amazon rainforest is being destroyed faster than had been estimated. Deforestation is the destruction of forests and wooded areas. Brazilian officials say deforestation of the Amazon increased by 29 percent in 2013. That is a large increase after gains that have taken place since 2009.

Information collected in late 2013 by Brazil's space research center showed signs that deforestation was increasing again. Researchers studied data from July 2012 to July 2013. The information showed that 5,891 square kilometers of forest had been cleared in the Brazilian Amazon area.

Many scientists say fighting the destruction of the Amazon rainforest is very important to reduce the effects of global warming. Global warming is an increase in temperatures around the world caused by gases that trap heat in the Earth's atmosphere. Experts say worldwide deforestation is responsible for 15 percent of the heat-trapping gases released into the atmosphere each year. The Amazon is also home to many different kinds of plants and animals. Experts say the Amazon holds billions of species that scientists have not studied. 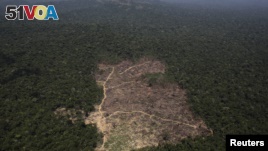 An aerial view of a tract of Amazon jungle recently cleared by loggers and farmers near the city of Novo Progresso, Para state, Brazil, Sept. 22, 2013.

The largest increases in deforestation took place in the states of Para and Mato Grosso. That is an area where most of Brazil's farming takes place. More than 1,000 square km of forest has been removed in those two states. One reason for the increase in deforestation is the rise in illegal logging, the cutting down of trees without official permission. Officials say big projects such as the building of roads and hydroelectric dams for electric energy also play a part in deforestation.

The Brazilian government often launches police operations to fight illegal loggers in the forest. However, critics say officials must do more.

Many native Brazilian people who live in the Amazon are displeased with the efforts of police forces. Recently, native people in the state of Para captured, unclothed and beat illegal loggers. They said if the Brazilian police would not do their job, the native people would do it for them.

Marcelo Teixeira reported this story from Sao Paolo and Jonathan Evans wrote it for Learning English. Mario Ritter edited it.

capture -  v. to take and hold someone as a prisoner, especially by using force

deforestation - n. the act or result of cutting down or burning all the trees in an area

global warming - n. the increase in the world's temperature that is believed to be caused by an increase in gases (such as carbon dioxide) in the Earth’s atmosphere

rainforest – n. a tropical forest that receives a lot of rain and that has very tall trees

Now it’s your turn to use these Words in this Story. In the comments section write a sentence using one of these words and we will provide feedback on your use of vocabulary and grammar.