Update Required To play the media you will need to either update your browser to a recent version or update your Flash plugin.
By Bryan Lynn
13 April 2022


World demand for batteries to power electric vehicles (EVs) is expected to increase sharply in the coming years. To prepare for this demand, some nations are seeking to increase their own ability to produce the materials needed to make the batteries.

Lithium-ion batteries are expected to remain the most widely used technology for EVs in the future. One of the main materials used to produce the batteries is lithium, a light metal substance. Other necessary materials include the metallic elements cobalt, manganese and nickel.

Prices for these materials have been rising as demand increases for EV batteries. The demand is expected to continue worldwide as major automakers keep expanding their EV production. 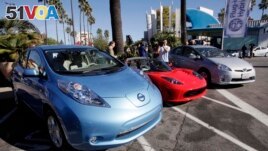 FILE - From left, electric cars from Nissan, Tesla, and Toyota are presented at a news conference in Los Angeles on Dec. 13, 2013. (AP Photo/Nick Ut, File)

China is currently the world leader in the EV market. In 2021, 3.4 million of the vehicles sold in China were electric, a report by the International Energy Agency found. Europe was the second largest market, with 2.3 million electric vehicles sold. Worldwide, the report said 6.6 million EVs were sold that year.

Chinese companies currently produce the majority of materials used to make EV batteries, the mineral cobalt among them. The largest known supply of cobalt is in the Democratic Republic of Congo. Chinese companies control most of the cobalt mining operations there.

Another necessary material, lithium, is found in many parts of the world. But it is costly and difficult to collect. Australia is the world's biggest producer of lithium. Other major suppliers include China, Argentina and Chile. China also largely controls the lithium supply chain.

Worldwide demand for lithium was about 317,500 metric tons in 2020. But industry estimates predict the demand could rise to more than six times that by 2030. Prices for lithium carbonate reached record highs in 2021, mainly because of strong demand from Chinese battery makers, Reuters news agency reports.

The world's top nickel supplier is Indonesia, which produced about 1 million metric tons of the metal in 2021, the website Investing News reports. Other nations with large nickel mining operations include the Philippines, Russia, Australia, Canada and Brazil.

Most of the nickel used to produce EV batteries is expected to come from mining operations in Indonesia, Reuters reports. In recent years, several large Chinese mining companies have announced major investments in Indonesian nickel projects.

Officials in the United States and other countries have said they will seek to mine and process more materials at home to produce EV batteries. Being less dependent on supply from other countries can help nations avoid high prices and availability issues.

"We can't build a future that's made in America if we ourselves are dependent on China for the materials that power the products of today and tomorrow," Biden said. "And this is not anti-China, or anti-anything else. It's pro-America," he added.

Currently, only one active lithium mine is operating in the U.S., in the western state of Nevada. But new mining projects for lithium are now being developed in Nevada, Maine, North Carolina and California.

One way to collect lithium is through geothermal methods from underground water sources. One such U.S. operation, in the Salton Sea in the California desert, is expected to become operational next year. A spokesperson for California Governor Gavin Newsom told The Associated Press the effort may end up producing "epic" amounts of lithium.

Companies in other countries also plan to use geothermal methods to collect lithium.

In Germany, a German-Australian partnership called Vulcan Energy Resources announced plans last year to geothermally collect lithium from an area in the country's Black Forest area. Some scientists have estimated the area in southwest Germany could hold enough lithium to supply batteries for up to 400 million EVs.

Bryan Lynn wrote this story for VOA Learning English, based on reports from The Associated Press, Reuters, Agence France-Presse and online sources.

battery – n. a device that provides and stores electricity for certain electronic devices

supply chain – n. the system of people and things that gets a product from its place of manufacture to the person who buys it

geothermal – adj. of or connected with the heat inside the Earth