Why Some Americans Keep Talking About Chicago 1968

Update Required To play the media you will need to either update your browser to a recent version or update your Flash plugin.
By Kelly Jean Kelly
03 September, 2018


As Americans and observers try to make sense of the country's current political situation, many are looking back to events 50 years ago.

The year 1968 was a difficult and dramatic time in the U.S. -- as well as in many other countries.

One important event in the U.S. that year was the Democratic National Convention. It was held at the end of August in Chicago, Illinois. Democrats gathered there to decide their party's candidate for president. But the meeting turned angry and violent.

Some of the issues that led to conflicts there are still part of the country's national conversation today.

One of the key issues Americans were facing in 1968 related to the war in Vietnam. The U.S. had been involved in the conflict since 1955. Tens of thousands had already died. 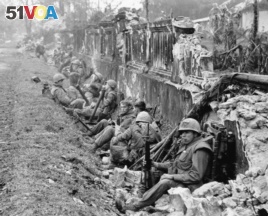 In this February 1968 file photo, U.S. Marines rest near Hue's imperial palace after a battle during the Tet Offensive.

Then, in early 1968, thousands more troops were killed in a series of surprise attacks by the North Vietnamese. The action was called the Tet Offensive, because the attacks happened during the celebration of the Lunar New Year, known in Vietnamese as Tet.

Following the Tet Offensive, a well-known U.S. television reporter called the conflict a stalemate. In other words, neither side could win but the conflict continued.

The opinion of reporter Walter Cronkite matched the feelings of many Americans. A public opinion study of early 1968 showed that half of Americans opposed the way the U.S. government was dealing with the war.

Yet top government leaders did not promise to end U.S. involvement. The president at the time, Lyndon Johnson, was quickly losing support, even within his Democratic Party. In March 1968, he said he would not seek re-election. Johnson's decision created an opening for other Democratic politicians to fight over the party's nomination.

Three major candidates divided the party. They were the vice president at the time, Hubert Humphrey; a senator from Minnesota named Eugene McCarthy; and a senator from New York named Robert F. Kennedy. Kennedy was also the brother of former president John F. Kennedy, who was killed in 1963.

In 1968, some voters were also demanding that government officials address issues of racism and poverty.

One of the leaders of the movement was Martin Luther King, Jr. He called for Americans of all races to come together and reduce economic inequality. King spoke about the need for better housing, better education, and better-paying jobs for struggling Americans.

In April 1968, King was preparing to protest with a group of African-American workers in Memphis, Tennessee. But on April 4, he was shot and killed while standing outside his hotel room.

Americans across the country soon learned of King's assassination. Riots broke out in more than 100 cities, including Washington, D.C.

On the same night, presidential candidate Robert F. Kennedy spoke to a crowd in Indianapolis, Indiana. He called for the country to come together.

He told the crowd, "What we need in the United States is not violence or lawlessness; but love and wisdom and compassion toward one another, and a feeling of justice toward those who still suffer within our country, whether they be white or they be black."

Two months later, on June 5, Kennedy was shot, too. He died the following day.

Battle outside the Democratic convention in 1968

For some Americans, King and Kennedy's deaths added to feelings of sadness and frustration about the Vietnam War, racism, poverty and other situations they believed were unfair and threatening. So when Democratic officials held their meeting in August, as many as 15,000 protesters came, too. These groups aimed to march to the place where Democratic Party officials were meeting and demand an end to the war, as well as attention to other social and political changes. Protesters and soldiers at the Democratic National Convention in Chicago, August 1968.

But police blocked their efforts. They said most protesters did not have permission to go near the meeting location.

News media showed some of the violence on television. Later, the events were described as a "battle."

Battle inside the Democratic convention in 1968

A battle was also going on inside the Democrats' meeting. Some officials wanted the party to call for an end to Americans' involvement in Vietnam. Others wanted to continue the U.S. government's plan for the war.

In general, powerful party leaders supported the candidate who would continue the war, Hubert Humphrey. But some party officials objected. Inside the meeting, they argued, sang, marched, shouted, and refused to give their support to Humphrey.

In the end, Humphrey won the party's nomination. But on television, the meeting appeared divided and out of control. One person who was there said many people who had attended the convention applauded when their airplane finally left Chicago. They were relieved it was over.

Effects of the 1968 Democratic convention

Less than three months later, Democrats narrowly lost the presidential election. Richard Nixon of the Republican Party was elected the country's next president.

As a candidate, Nixon said he would continue the Vietnam War until Americans could reach "peace with honor." Nixon also said he spoke for Americans who believed in "law and order."

His words connected with some voters. For example, opinion studies at the time found that a majority of Americans approved of the way that police and city officials had acted toward the Democratic convention protesters. These Americans may not have supported the war in Vietnam, but they did not support the actions of the protesters, either.

Yet, some of the protesters' objections, and the problems that came to light during the Democrats' meeting that year, remain unresolved. Historians point to 1968 as a time that increased feelings of distrust between the public and political parties; the public and government officials; protesters and the police; and government officials and the media.

convention - n. a large meeting of people who come to a place for usually several days to talk about their shared work or other interests or to make decisions as a group

Lunar - adj. of or relating to the moon

stalemate - n. a contest in which neither side can gain an advantage or win

frustration - n. a feeling of anger or annoyance caused by being unable to do something

bystander - n. a person who is standing near but not taking part in what is happening

applaud - v. to strike the hands together over and over to show approval or praise

relieved - adj. feeling relaxed and happy because something difficult or unpleasant has been stopped